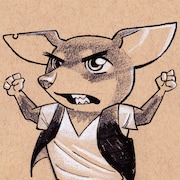 D.R.E.A.M- Dogs Rule Everything Around Me

I'm Shaun Pinello and in 2013 I started Little Dog Comics as a blog to share my art and comic strips. The first strip I worked on was called Agent Pickle featuring my dog, Alma Pickle, as a bomber jacketed, jet-pack piloting, secret agent. I never finished that strip but I mention it because it's an example of my two greatest interests; dogs and comics. By taking a look around my shop you've gathered as much, I'm sure.

In the years since founding Little Dog Comics I've developed my skills as an artist, published a handful of comic strips and short comics, and now it's time to move to the next level. I'm currently working on a graphic novel called Bucky and Alma Forever and (you guessed it, it's about my dogs) I'm selling art, prints, and other items to raise money to print the book when it's finished. Think of Etsy as comic con and my shop is my booth at artists alley.

So, take a look around. I hope you find something you like and if there's a character you'd like to buy a print or original art of that's not on here, just message me and I'll try to make it happen for you.