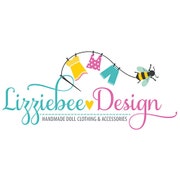 LizzieBeeDesign is taking a short break

Note from shop owner Taking a little break while the studio gets re-done :) See you soon!

Taking a little break while the studio gets re-done :) See you soon!

A lifetime of creativity and love

Lizziebee Design is a one-woman studio specializing in handcrafted, quality clothing for American Girl, Springfield, Madam Alexander, Our Generation, and other 18" soft-body dolls.

The studio is owned and run by Lizzie, who has been sewing for over fifteen years. She received her first American Girl doll in 1991 and has been hooked ever since. After starting out making clothing for her own dolls, Lizzie branched out into the collectors market, selling to fellow American Girl fans before taking the plunge to start her own Etsy store and sell to 18" doll fans everywhere.

In 2010, Lizziebee Design became a Liberty Jane Clothing Premier Partner, selling authorized items made from Liberty Jane patterns in addition to original designs from Lizzie herself.