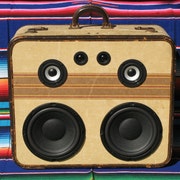 Oakland born and raised, MAK is the designer and creator of MAKBUILT, a line of re-purposed, fully functional, one-of-a-kind art. A builder by day and an artist by night, MAK is influenced by music and street art – his own art combines yesteryear’s retro aestheticS with modern technology and functionality.

MAK’s love for music and nostalgia for the era of his childhood inspired his own version of a boom box that re-purposed his father’s wooden briefcase into a portable sound dock enabling him to share his tunes wherever he rambled. MAK’s desire to investigate how things are made and function fuels his own innovations, leading him to turn his bicycle into a motor bike, a belt buckle into a carved wooden pocket knife, and resulting in a finished carpenter’s “face-lift” of a vintage camera. Each one of MAK’s unique pieces is imbued with his personal touch: a devotion to craft and a flair for style.

Last updated on May 10, 2022
Thanks for shopping MAKBUILT, an independent maker & builder.

If you are not happy with your MAKBUILT product please let us know! Contact us through etsy conversations or by email: info [!at] makbuilt.com

We want you to be happy with our products, and we will do our best to make that so. If you are seeking a refund for any reason, please contact us first before sending the product back.

Refund policies:
1) Product must be in its original packaging For Makbuilt Boomboxes, returns are accepted within two weeks of receiving shipment. Boombox needs to be fully packaged with all paper inserts, cable, and in perfect working condition.
2) Product must be in the original condition
3) Must be within warranty guidelines below

MAKBUILT warrants the included hardware product against manufacturing defects in materials and workmanship for 6 months from the date of original retail purchase. MAKBUILT does not warrant against normal wear and tear nor damage caused by accident or misuse. For example this warranty does not cover: cosmetic damage, improper operation, improper voltage supply or power surges, damages from shipping, natural disasters, any type of customer misuse, modifications, or adjustments attempted by anyone other than MAKBUILT services.

MAKBUILT is not responsible for transportation costs to the service center, but MAKBUILT will cover return shipping to the customer within the U.S. Pre-Authorization is required before sending in any unit in for warranty service. MAKBUILT will either repair or replace your product at its' own discretion. Proof of purchase details are required when making a claim under this warranty.

To obtain warranty service contact MAKBUILT via email: info [!at] makbuilt.com
This warranty is subject to change without notice.