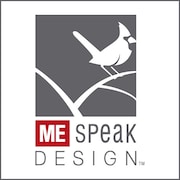 Though each of us has traveled extensively, it took “ME finding her” and “ME finding him” before we were able to confidently realize a design style. Together, we work with a strong sense of place as we seek and celebrate inherent beauty of native and found materials. Combining our love of the rustic, rural South with our regard for the intrigue of the Japanese aesthetic, we build elegant furniture and functional art for the home.

We live in North High Shoals, Georgia with our three children, Claire, Julia, and Maximilian who play an instrumental role in family-testing every ME Speak piece. Everything we create is tested on the rug in our home.

Lori Wright grew up on fifty-three acres in Conyers, Georgia. Her inspiration today comes from her father who is a carpenter; and her mother's japanese, Hawaiian roots. Growing up, if she wasn't outdoors spending time in the countryside, Lori was beside her father in his workshop, absorbing his craft. She later studied marketing at the University of Georgia, working her way through school by selling t-shirts at colleges and universities all throughout the United States. On the strength of this experience, she later pursued a career building college housing. Lori's Japanese heritage and her life experiences growing up in the South continue to influence her design aesthetic. Hers is the eye.

Eric Wright is a native of Atlanta, Georgia. He grew up surrounded by his mother’s art, and Following an apprenticeship as a carpenter in Athens, he went to school in Oregon, where he built titanium bicycle frames and learned both TIG welding and machining. His travels took him from there to the Indian state of Maharashtra, outside of Mumbai, where he studied practical, sustainable architecture and the art of furniture-making. He continued these studies in Vermont and then in Costa Rica, where he developed an appreciation for indigenous building techniques and tropical hardwoods. Later, Eric taught a beginning blacksmithing course and further developed his own skills at the John C. Campbell Folk School in North Carolina. His are the hands

Last updated on September 28, 2018
ME is Us, husband and wife team Eric and Lori Wright. It is just the two of us from design, build, packaging, shipping, photography and all things customer service.

We stand behind our products to ensure they live a long life with you. Shown correct care our products will last longer than we will. Should you find otherwise, by all means let us know and we'll work together to find a satisfactory solution. However, due to our handmade process we do not offer refunds or cancel orders once they have been placed. Contact us at info [!at] mespeakdesign.com with any questions or concerns.

We accept all major credit cards and pay pal, so no excuses, get to shopping!

All of our in stock items ship within 5 business days. Our out of stock items ship within 2-4 weeks. We insure all of our shipments but cannot guarantee delivery date once it is shipped out and are not responsible for USPS or UPS error. We ship via USPS and UPS and will provide you with a tracking number once shipped.
We package all orders in bio degradable packaging, 100% recyclable. No bubble wrap or syrofoam chips here!

*All our items are drawn by hand and made by hand.
*We only use natural finishes for our wood and steel products.
*Depending on the item, it might take up to four weeks to ship . Our natural oils do not contain chemical dryers or polymers. These oils take time to cure properly but once they do you can expect a finish which is beautiful and easy to maintain.
*Our products are designed to live and continue living for generations. Buy quality and buy it once.
*Eric and Lori design all ME Speak Designs products. The designs are inspired by our life and the things we love. Copyright is assumed for design protection.