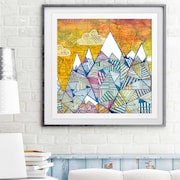 MadaraMasonStudio is taking a short break

Painting in the Arctic, Acrylics, Prints, and Colorful Decor

I’m a painter, graphic designer, and illustrator working out of Fairbanks, Alaska. My work is primarily about color and energy and usually depicts animals in an anthropomorphic light combined with iterative marks meant to suggest the natural world. I’m always interested in trying new media, learning new processes, and collaborating with other artists. Some of my accomplishments are listed below.

For Prints and other Printed Items:
I will refund 100% of your purchase if the item arrives damaged or not at all. If your purchase arrives much later than indicated in the sale, we will discuss a partial refund or future coupon.

For Original Artworks
Since your investment is valuable, if for any reason my work arrives damaged, please photograph the damage, and contact me and we will arrange for the work to be shipped back to me and I will refund the purchase price and any shipping costs associated with the return.

I pack all of my paintings in flat boxes with the edges protected by bubble wrap, styrofoam, and packing paper. They should arrive in great condition, and if they don't please contact me to arrange for a full or partial refund depending on whether you want to keep the damaged artwork or not.

Some of my printed items arrive via drop shipping through a third party. If they arrive in damaged condition, please send me a photo so that I can refund your money if needed.

**International shipping can take up to 3 weeks from the ship date!!

I occasionally do custom work for clients depending on the request and the time I have to do commissioned work. Please let me know if you are interested by sending me a conversation with information about your request.