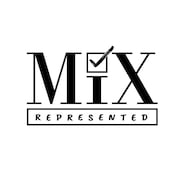 For many multiracial families not "looking" like they "belong" together is a legitimate fear that has led to police being called for assumed kidnappings and left parents resorting to carrying identifying documents to prove they are the legal guardians of their own children. Daily microaggressions- asking parents if they are the nannies or babysitters of their children or spouses not being assumed to be together when out- are reminders that we still very much live in societies that uphold monoracial norms.

Our designs are created to help challenge notions of what families and multiracial people look like, with the intention of sparking the curiosity of others to learn more about our histories, experiences, and communities. We hope this will ultimately lead to allies/accomplices engaging in antiracist practices.

For years Naliyah Kaya had been frustrated by the lack of graphic tees and accessories designed specifically for the bi/multiracial community. When she did find items, they often fed into stereotypes promoting the exotification of multiracial people and/or advanced the post-racial utopia myth.

In 2013 she met designer Alex Pryor when she became the Coordinator for Multiracial & Native American/Indigenous Student Involvement at the University of Maryland College Park. Alex was part of the Multiracial Biracial Student Association (MBSA) and was the highly sought after student designer for the Office of Multicultural Involvement & Community Advocacy (MICA). They began working closely together on events and marketing for the multiracial community at UMD.

In 2017, Naliyah was brainstorming Multiracial Heritage Month themes and came up with Mix-Represented as a play on words referencing how multiracial experiences are often mis-represented and/or missing. She began sketching slogans and designs for an apparel line with a social justice focus for the multiracial community. Naliyah then ran the idea by Alex, who quickly went to work on the logo and bringing the apparel sketches to life. Co-founded in 2018 by Naliyah & Alex, Mix-represented debuted at the Critical Mixed Race Studies Conference at the University of Maryland College, Park.