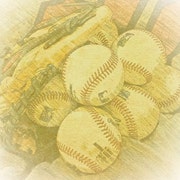 Announcement    Welcome to Mudville Nine, where baseballs that have given their lives to art and science are born again! Each listing has a history, and the baseball it came from contributed in a very real way to preserving and understanding the Game. You'll love every item here, but you'll love its story even more!

Welcome to Mudville Nine, where baseballs that have given their lives to art and science are born again! Each listing has a history, and the baseball it came from contributed in a very real way to preserving and understanding the Game. You'll love every item here, but you'll love its story even more!

Saving the Game, One Baseball at a Time

Mudville Nine is the unexpected byproduct of the art and science (literally!) of baseballs. Back in 2014, Meredith Wills—an astrophysicist, sports data scientist, and knitting designer—began looking into the design possibilities of Major League and Minor League baseball yarn. (For those who don’t know, the interior of a baseball is largely yarn.) She found that it was indeed knittable and subsequently entered into collaboration with the Baseball Hall of Fame and Museum, creating original knitted pieces to be auctioned off as fundraisers.

Because each ball is only three inches across and contains layers from three different yarns, such creations require a LOT of baseballs. A shawl needs around ten; a sweater requires at least twenty; even a stocking cap uses five. As a result, Meredith began to slowly but steadily accumulate MLB and MiLB baseballs, either collecting them herself or with the help of friends. She also got very good at carefully and systematically disassembling them, so as to keep the yarn intact.

Then, in 2017, Meredith’s interest was piqued by MLB’s inexplicable Home Run Surge. Having developed an intimate knowledge of baseball construction, she took apart and examined the construction materials of balls from before and during the Home Run Surge. Her results (published on The Athletic at https://theathletic.com/381544/2018/06/06/how-one-tiny-change-to-the-baseball-may-have-led-to-both-the-home-run-surge-and-the-rise-in-pitcher-blisters/) found a significant difference in the thickness of the red laces, and a followup study ( https://theathletic.com/533397/2018/09/19/studying-the-baseball-to-find-the-how-of-the-home-run-surge/ ) showed how that change in lace thickness likely led to the spike in home runs.

Naturally, this research into baseball construction required yet more balls. In fact, as these studies are ongoing, the baseballs will continue to accumulate.

Each step in this baseball construction research results in a large number of disassembled balls. While the yarn is ideal for Meredith’s collaborations with the Hall of Fame, the covers and laces have presented something of a problem. It seems a waste to throw them away, but what to do with them?

Mudville Nine is the ideal solution. Instead of simply discarding these baseball "leftovers," they are being recycled and repurposed. Not only that, but each accessory offered here can be directly connected to something meaningful within the baseball community. "This keychain came from a ball that helped explain the 2017 Home Run Surge." "That bracelet was once part of a baseball whose yarn is helping raise funds in support of the Hall of Fame." These items are much more than leftover leather covers and laces; they are teeny-tiny pieces of baseball history.