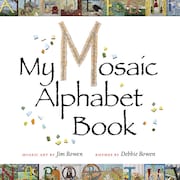 An alphabet book of mosaic art

FREE SHIPPING with all orders

When their granddaughter, Pilar was born six years ago, Jim began to create a mosaic alphabet book for her to enjoy when she was older. The mosaic panels were completed in November 2016. Next, Debbie and Jim embarked on another adventure; self-publishing. They didn't know where to start- so they just put it out to the universe to guide them through the maze. Door after door opened- one leading to the other, and before long they had found a fantastic photographer, an amazing book designer and a American bookprinter to accomplish the task.
Their treasure of words and mosaics arrived in July. Through a network of friends and fans, the book is quickly finding it's way in libraries and homes throughout the world already.
Jim has been a mosaic artist since 1998. He has taught hundreds of budding artists. His public art murals and individual mosaics can be seen at private homes, hospitals, art centers and along public ways. Debbie has been a wordsmith since her parents bought her a book of rhymes when she was a little girl. She is working on a series of children's books featuring the adventures of Pilar and her other grandchildren.