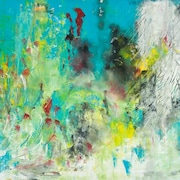 Unique original Abstract Paintings, Contemporary Art. I have been a professional artist for over 20 years and all of my paintings are made with love. All work is done while travelling around the world during the Art Journey with my partner Sebastien who is a musician and also a painter. We have been travelling around the world for the last 2 years painting big murals for cities, businesses and bartering art for food/lodging. All items are currently shipped directly from Paris.

If you'd like to order a custom painting, please send me a message. :-)

Need some help finding things?
Shop by category over here:

Unique original Abstract Paintings, Contemporary Art. I have been a professional artist for over 20 years and all of my paintings are made with love. All work is done while travelling around the world during the Art Journey with my partner Sebastien who is a musician and also a painter. We have been travelling around the world for the last 2 years painting big murals for cities, businesses and bartering art for food/lodging. All items are currently shipped directly from Paris.

If you'd like to order a custom painting, please send me a message. :-)

Need some help finding things?
Shop by category over here:

Every painting is a statement of being in the present moment. Her vibrant French personality is unique, living art to the fullest.

Nadia is navigating her way around the world with paint, brushes and her creative soul. Originally from Canada, her trademark is certainly to create tailored artworks in exchange of goods that extend from bus tickets, dentist appointment, clothes, meals to hotel sejours. The movement has been initiated by her residency at the Hotel Chelsea in New York in 2009. In the same year she flew to China for an exhibition at the Shanghai Art Fair. Since then she has introduced relational process paintings to Asia. She has been the Artiste in Residence at the Vistana Hotels, Malaysia and lived in Perth Australia, cross Spain by walk and exhibited in Singapore at the Fullerton Hotel. Nadia studied visual arts at University of Quebec in Montreal, MFA graduated in Chicoutimi 2005 research on the contribution of artist in contemporary society. After studying modern dance, music, sculpture and photography and abstraction, she now focuses on painting. Her work is part of many collections; she has exhibited in Canada, US, Europe, China, Malaysia, Australia, Singapore. Her vibrant French personality is unique, living art to the fullest.
Inspiration comes from being in contact with different cultural light. The paintings display energetic movement and witness her experience of living in Asia. She harmonizes rich and luminous colors and applies the paint on canvas as the surface echo her inner feelings. The whole process of creation is fully integrated in her life style. Every painting is a statement of being in the present moment.
Since 2008, she has been travelling full time and she is presently with Sébastien, a musician who is also a painter. When it gets to big murals, they work together. They have been travelling on a tandem bicycle and painting their way around the world for the last 2 years. They now live in paris where they currently work on many paintings. Nadia loves blue oceans and the idea of having free time and free time. She plays with color, textures and space.

Artist pays in paint for Chelsea Hotel sojourn
Added by admin on May 28, 2009.
Saved under Arts

BY PATRICK HEDLUND | When Canadian painter Nadia Bertrand first arrived in New York City, she walked into the Chelsea Hotel with grand plans of trading her work for a room at the infamous artists’ enclave.
“I came with my painting, and the guy laughed at me,” she recalled of her visit to the front desk last year. “He was laughing at me and telling me these days are over.”But Bertrand persisted, eventually finagling a face-to-face with hotel shareholder David Elder to make her pitch. He ended up liking her work, so the acting manager struck a deal to host the artist for 10 days in February for the price of a painting.“I could accommodate her, and the work was interesting,” Elder said recently from his airy office just off the hotel’s lobby. “It’s along the lines of what we are.”Unwitting or not, Elder’s gesture marked a revival of the hotel’s legendary art-in-lieu-of-cash plan, a practice originated by former longtime manager Stanley Bard when dealing with the Chelsea’s struggling artist residents.But Elder, a descendant of the hotel’s original owners, might not appear the most likely candidate to agree to such overtures. Since ousting the beloved Bard in 2007 following a management dispute, he has been locked in a war of sorts with the hotel’s pro-Bard residents. They accuse him of trying to evict long-term tenants as part of plan to convert the Chelsea to an upscale boutique and capitalize on its historic legacy.In Bertrand’s opinion—she learned of the internal squabbles only recently—Elder is simply carrying on a longstanding tradition at the bohemian landmark, one which drew her to the hotel in the first place.“I stand for art,” she said when speaking of the tenants-vs.-management saga. “And David Elder stands there, too.”Bertrand hosted a reception at the hotel on Sun., May 10, to celebrate the presentation of a second painting, which will go on display in one of the hotel’s many art-adorned rooms. Fresh from an exhibition in Soho, the piece represents her final payment for what ultimately turned into a month-long stay at the Chelsea, where room rates run anywhere from $189 to $399 per night.“It’s very, very, very, very stimulating here,” she said of the hotel’s ubiquitous art. “You see so much good work.” The affable artist, who hails from Montreal and speaks with a thick French-Canadian accent, completed four paintings during her initial visit.Emboldened by that week-and-a-half sojourn, Bertrand returned to the hotel in March with another offer, explaining to Elder that she didn’t have plans for the painting after its exhibition run. She scored another stay, this time for three weeks, in exchange for the piece.“We want to operate in that area we’re in,” Elder said, “the history and culture and cachet that we have.” The deals were undoubtedly easier to make considering the hotel’s low occupancy rates, and Elder said that “we’ll take it as it goes in terms of if other people are interested.”Bertrand said she got a sense of that history and culture from the unique confluence of long-term tenants and tourists, insiders and outsiders.“You get the vibe of the place,” she said. “It’s like a family, exactly like a family. When I am there, I feel home. I feel like it’s a family—with the good things and the bad things.”At the party on Sunday, a group of Bertrand’s friends came to fete the artist as much as the circumstances that brought her to the hotel.“Things like this still happen,” said Merle Lister, who’s lived in the hotel for 27 years. “He (Elder) realizes there’s artistic people, and not to have that—that would be terrible. I think they’re realizing that this is the life of the Chelsea.”
- See more at: http://chelseanow.com/2009/05/artist-pays-in-paint-for-chelsea-hotel-sojourn/#sthash.7nESsCa0.dpuf

Down below is my resume:

Agnieska Matejko, Edmonton gets its art on with The Works,
VueWeekly, juin