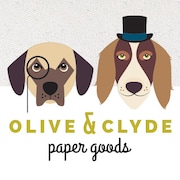 OliveAndClyde is taking a short break

Note from shop owner Hi, friends! We're sad to announce Olive & Clyde is shutting down. If you have any questions, feel free to contact us at oliveandclyde [!at] gmail.com.

Hi, friends! We're sad to announce Olive & Clyde is shutting down. If you have any questions, feel free to contact us at oliveandclyde [!at] gmail.com.

Olive & Clyde was originally started by Moriya and Haley, two friends who wanted to find a way to create things together. When they decided to start their own company, they wanted to build something they would love and be proud of; they knew they would end up holding Olive & Clyde dear to their hearts, so what better name for their company than that of their favorite pooches in the world?

Olive is Moriya's dog, a mutt of unknown origin who is proudly afraid of shadows, plastic bags, and balloons. She also happens to be a master of balancing objects on her head and really smelly farts, but her greatest role is that of big sister to her human partner-in-crime, Rose.

Clyde is Haley's dog, the laziest English Springer Spaniel known to man -- except when he hyperventilates over car rides. He's a virtuoso when it comes to sleeping, holding a grudge after baths, and being suspicious of the lawn mower. His favorite treat? Carrots.

While Haley runs the company by herself now (turns out having two kids doesn't leave a lot of time for side businesses—who knew??), these two mutts still represent the traits at the heart of every card we create: love and weirdness. The greeting cards, stationery, and other paper goods sold through Olive & Clyde are meant for those who want to say something meaningful but sometimes get turned off by the sappiness of your standard grocery store card. O&C products are snarky but sweet, for those who understand the appeal of being a little bit irreverent and silly. We know it’s important to say the right thing and to tell people what they mean to you -- but you can still be your smelly, sleepy, fraidy-cat and carrot-loving self while doing it ;)

Want to know more about the people behind Olive & Clyde and our philosophy? Check out our About Us page or our website, oliveandclyde.com.