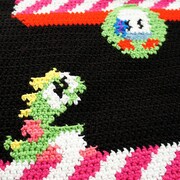 Announcement    I will update any blanket listing once it is complete and ready to ship. With a little one to chase my crochet days are limited. Thank you for understanding and please stay up to date by following me on social media, I will post updates whenever I add a blanket to my shop.

*Patterns not available for sale.

I will update any blanket listing once it is complete and ready to ship. With a little one to chase my crochet days are limited. Thank you for understanding and please stay up to date by following me on social media, I will post updates whenever I add a blanket to my shop.

*Patterns not available for sale.

Do What You Love.

Fun fact, I've never beaten a video game in my life. I have, however, always made it to the boss. Apparently I'm not very persistent and I definitely don't like confrontation.

I asked my mother to teach me to crochet when I was twelve and about to become an aunt for the first time. It was a tiny little pink and white striped "receiving" blanket, the edges curved in and out and I'm sure it fell apart after one wash. I was super enthusiastic about creating though and I brought yarn with me everywhere. I could often be found in class with my backpack in my lap, crocheting feverishly beneath my desk. Lucky for me and my new hobby, my family was lousy with newborns.

As an adult I had continued to gift baby blankets to coworkers, friends and family members until one day my husband, Terrence, asked if I would make him a blanket. It took me a few years to get around to it, I thought the idea of making a large blanket sounded a bit daunting. I only ever made one full length blanket before, I'd made it for myself and it took me twelve years to complete. Terrence threw an even bigger request my way when he joked that I should make him a blanket with Space Invaders on it.

I secretly accepted his challenge and in 2010, it took me just two months to make not only a blanket with Space Invaders on it... but the entire level of the game. Terrence loved his gift so much, he wrote about it at his job with AOL News (www.switched.com/2010/02/02/my-hand-made-space-invaders-blanket-is-the-best-gift-ever/).

Once his readers, coworkers and the band of followers from twitter saw what I had made for him, they urged me to sell my blankets. After making one more Space Invaders blanket (in the correct colors, his was brown and blue), I was ready to test out the internet sales market.

In 2011 I registered my store here on Etsy with just one blanket to sell, after that blanket sold Terrence had a new challenge for me, Donkey Kong. I laughed when he suggested I make a full level Donkey Kong blanket, I had no idea where to even start. It took me nearly a year of plotting and crocheting tiny sprites of each character before I was ready to see if I could do it. After I accomplished making that, everything else seemed super easy, so I made a few more afghans and updated my shop once more in the winter of 2012.

Since then I've been trying to branch out my line of video game themed blankets, attempting to bring you guys as many of our beloved friends as I can. Its a ton of fun creating each blanket, especially when I get the opportunity to make new scenes and games. My goal is to one day be able to do this as my full time job, I've always wanted to be able to do what I love... and I really love this.

Last updated on May 18, 2022
Hey! If you want to learn more about me and perhaps my other projects you can visit my website at http://www.penelopeandclyde.com/

All sales are final unless fault or damage of my own. If you have ANY questions or concerns, please feel free to message me first.

I ship all items through the US Postal Service as soon as they are completed.

If you have any personal issues with the USPS I'm completely sympathetic and more than willing to ship though another provider by request. Just be sure to ask me before you make your purchase.


All items are made to order, the time it takes to ship depends entirely on my current workload. If you need an item by a specific date please contact me before you make your purchase to ensure it will arrive on time.

If for any reason I fall behind on my orders I will always let you know ahead of time. Please make sure to check out my shop announcements for any notices on shipping delays before you make your purchase, https://www.etsy.com/shop/PenelopeandClyde/policy?ref=nav_tab_policies.

I will take custom orders depending on my current workload. Please feel free to message me with any questions or ideas.