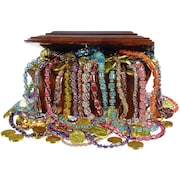 Announcement    Welcome to Pinnacle Beads. We specialize in offering the best of glass (and class) David Christensen Cane Glass Beads, and may at times even offer some of his other unique glass creations, which are all handmade in the USA from cane/furnace glass, along with some of our own creations.

You can also visit our WebSite at www.PinnacleBeads.com for additional information and any current Auctions.

And if there aren't many beads listed at the moment it's because I've been spending a lot of time at the Horse Rescue/Sanctuary... horseplayrescue.org where everyday is an adventure!

Welcome to Pinnacle Beads. We specialize in offering the best of glass (and class) David Christensen Cane Glass Beads, and may at times even offer some of his other unique glass creations, which are all handmade in the USA from cane/furnace glass, along with some of our own creations.

You can also visit our WebSite at www.PinnacleBeads.com for additional information and any current Auctions.

And if there aren't many beads listed at the moment it's because I've been spending a lot of time at the Horse Rescue/Sanctuary... horseplayrescue.org where everyday is an adventure!

The Making of a Logo

It all started in 2004, when David needed a photo for an ad in Bead & Button Magazine for the Bead & Button Show in Tucson Arizona that year. It was 5 days of shooting pictures of lots of bead strands in a treasure chest. Lots of ugly pictures and arrangements that were never quite right until the 5th day, when the gold wrapped chocolate coins were added. A photo for the ad was born along with the logo for Pinnacle Beads! The ad appeared in Bead & Button Magazine June 2004, Issue #61 on page 146.

I went to Tucson that year, having never seen anything like those beads shows before and never looked back. That's also the year I fell in love with vortex marbles.

Last updated on August 1, 2022
Welcome to Pinnacle Beads. We specialize in offering the best of glass (and class) David Christensen Cane Glass Beads, and may at times even offer some of his other unique glass creations, which are all handmade in the USA from cane/furnace glass, along with some of our own creations.

You can also visit our WebSite at PinnacleBeads.com for additional information and any current Auctions.

Pinnacle Beads is backed with over 18 years of industry experience and has and will continue to offer the highest (otherwise known as the Pinnacle) level of products and service. Fine quality, fair price! Treating others the way we would want to be treated.

At Pinnacle Beads our goal is 100% customer satisfaction. If for any reason you are not satisfied with your purchase, you can return it within 14 days of the delivery date for a refund or exchange.

Exchanges – will be given subject to any price adjustments and additional handling and shipping charges.

All undamaged, non-defective return items must be in their original condition to qualify for a refund; otherwise, additional charges may be applied.

Please contact our customer service at 401.484.1152 or send us an email at customerservice [!at] pinnaclebeads.com, to obtain a return authorization number and return shipping instructions.

All returned items should be sent via an insured courier with a tracking number, because we cannot be responsible for items that do not make it back to us or get damaged on the way. Please include our return authorization number on the package. Return shipping costs are the responsibility of the buyer.

However, if we made an error that requires a return, or an item is damaged or defective, we will gladly correct the mistake or problem by paying all of the charges to return the merchandise and to send out the correct or replacement merchandise.

PayPal is the best payment method. If you live in Rhode Island we have to charge sales tax.

Most orders will be processed and shipped within 48 hours, unless any of the horses are causing trouble or don't feel well and need some extra attention. We will send you a confirmation email when your order is shipped.

If your purchase from more than one of our online stores at the same time and pay using PayPal, we will combine your shipping, adjust the amount accordingly and issue you a refund.

I don't plan on doing any international orders at the moment, but that may change in the future. If it does, for International orders, please include your phone number because it is required on the Customs Form and is needed to produce the computer-generated shipping label and shipping notification.

If you're looking for something in particular just ask. If it's not listed, we may still have it. I did do a video of most of the beads that I have on hand, and there is a link to it from the website. It's actually 15 minutes long and quite large in size so I could not post it on Etsy. I will see what I can do about trimming it down in size in the future.

At Pinnacle Beads, we are committed to protecting your privacy. We use the information we collect about you to process your orders and to provide you with a more personalized shopping experience. Pinnacle Beads does not and will not sell, trade, or rent your personal information to others.

What Information Do We Collect? How Do We Use It?
When you order, we need to know your name, e-mail address, mailing address, and depending on your payment method, your credit-card number and expiration date. This allows us to process and fulfill your orders and to notify you of your order status.

You may voluntarily sign up to be informed about certain offers. For this service we need only an e-mail address, which we use to send the information you requested.

When you enter a contest or other promotional feature, we may ask for your name, address and e-mail address, so we can administer the contest and notify winners.

We may also use the information we collect to occasionally notify you about important changes to the Web site, new Pinnacle Beads services and special Pinnacle Beads offers we think you'll find valuable. If you would rather not receive this information, please notify us. Make sure to notify us for each account or e-mail address you have left with us.

How Does Pinnacle Beads Protect Customer Information?
This Pinnacle Beads Website is secured with an SSL Certificate. Transactions on the site are protected with up to 256-bit Secure Sockets Layer encryption. Secure Sockets Layer (SSL) is the standard security technology for establishing an encrypted link between a web server and a browser. This link ensures that all data passed between the web server and browsers remain private and integral. SSL is an industry standard and is used by millions of websites in the protection of their online transactions with their customers.

What About "Cookies"?
"Cookies" are small pieces of information that are stored by your browser on your computer's hard drive. Our cookies do not contain any personally identifying information, but they do enable us to provide features such as 1-Click shopping and to store items in your shopping cart between visits. Most Web browsers automatically accept cookies, but you can usually change your browser to prevent that. Even without a cookie, you can still use most of the features in our store, including placing items in your shopping cart and purchasing them.

Your Consent
By using our Web site, you consent to the collection and use of this information by Pinnacle Beads. If we decide to change our privacy policy, we will post those changes on this page and notify you, so that you are always aware of what information we collect, how we use it and under what circumstances we disclose it.
See this Seller Handbook article for a sample privacy policy you can customize for your shop.