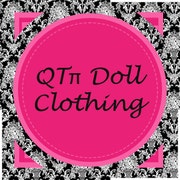 Turning a need into a passion.

My youngest daughter has Autism and when she was young she had some sensory aversions to clothing which resulted in me making the majority of her clothes. Of course when she received a 18" doll from her grandmother for Christmas it only made sense to her that her doll would have the same concerns. I started to notice that whenever my daughter had her doll out in public (which was almost everywhere we went) people would inquire about the clothes. They would say things like "where did you buy those, they are beautiful " and " they don't make them like that in the stores". They would gush over them. In the beginning I started to make doll clothes for friends and family as gifts. Then one day it just clicked when a very close friend said you should start your own business. So I did! hence the beginning of QTπ Doll Clothing.

Last updated on January 23, 2023
I specialize in modern clothes for various doll. I pride myself on quality workmanship and and excellent customer service. My items are not always one of a kind, but not mass produced.

All my fabric is pre-washed. My clothes can be washed just like your own. Delicate fabrics should be washed by hand

Is your fabric pre-washed or treated?

All fabric is pre-washed. Dark fabrics and denim fabrics are treated with a vinegar solution to set the colour. Dark denims are washed before and after sewing. Due to the porous nature of vinyl is suggested to not leave dark clothes on your doll for extended period of time whether they are hand made or store bought.