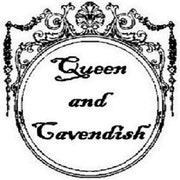 QueenAndCavendish is taking a short break

Note from shop owner Queen and Cavendish is relocating to Portugal and will re-open for business in approximately November 2022. For store updates subscribe to our Instagram page QueenandCavendish.

Urgent emails will be responded to.
You may also contact me directly at qandc1774 [!at] gmail.com

See you all again soon.

Queen and Cavendish is relocating to Portugal and will re-open for business in approximately November 2022. For store updates subscribe to our Instagram page QueenandCavendish.

Urgent emails will be responded to.
You may also contact me directly at qandc1774 [!at] gmail.com

See you all again soon.

Queen and Cavendish - named for Marie Antoinette our great queen of fashion (and of France of course!) and Georgiana Cavendish, her English rival in fine taste. 1774 proved to be the year that dramatically changed these great ladies lives.

In May of 1774, King Louis XV of France died of smallpox. On this day, Marie Antoinette transcended from Dauphine to the Queen of France. Her husband, the grandson and heir to the French throne, became King Louis XVI of France.

A month later in the same year, across the English Channel, Lady Georgiana Spencer (of the same Spencer family as the late Diana, Princess of Wales), married William Cavendish, the Duke of Devonshire. We know her as "The Duchess".

Fashion seemed to have been a keen distraction for both of these ladies, and what's the point of a fabulous outfit without the right accessories?

Here at Queen and Cavendish, I am greatly inspired by the glittering jewels of the 18th century.....I particularly love the portrait jewelry of the era and the gorgeous and ornate chatelaines. I find both of these areas highly under represented in the historical costuming world and yet they are both so fabulous. They add that extra piece of authenticity to a wonderful historical costume.....and then there are the sparkles....anything that glitters catches my eye, and the incredible paste and old cut diamond jewelry of the 18th century is no exception. I try to create pieces, that are not exact replicas, but are indicative of 18th century, particularly rococo, style.

"If it isn't sparkly enough, put a little rhinestone bow on it." Moi