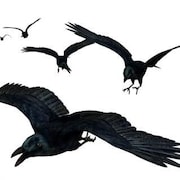 Announcement    Due to health issues, Ravyn's Cache is not currently listing any items for sale, nor are we doing any local markets or shows.

If there is something you would like us to create for you, however, please contact us and we can work something out.

Profit from any items sold will be donated to Tenth Life Cat Rescue in St. Louis, MO.

Due to health issues, Ravyn's Cache is not currently listing any items for sale, nor are we doing any local markets or shows.

If there is something you would like us to create for you, however, please contact us and we can work something out.

Profit from any items sold will be donated to Tenth Life Cat Rescue in St. Louis, MO.

An eclectic mix of handmade jewelry, art and other crafts.

What does jewelry have to do with ravens and crows, you ask? Well, all corvids (crows, raven, magpies and jays) have a reputation for picking up and hoarding shiny and pretty things! A flying packrat, if you will. And that is definitely me (except for the flying part).

Several decades ago, I wandered into a wonderful little shop that was part used bookstore and part eclectic gift shop, and fell in love with the idea of a little corner of magic of my own. To have a place where I could make, buy and sell things from all over became my dream. I loved to craft, and loved to shop, and what better way to do both but not have to keep a warehouse to store it all! I decided the shop would be named Ravyn's Cache, both for the Raven/Crow aspect of collecting shiny things, but also because I was known in a few circles as Ravyn already.

Eventually, after various paths crossed and recrossed, and roads were taken (or not), I would continue to make things but give them away. Then a friend suggested Etsy, and here I am. Ravyn's Cache became a reality, and while only my handmade items are sold here in my shop, I do also collect other things that catch my fancy, and occasionally resell those in my store.

My Etsy shop has only a tiny amount of my crafted items, but if you see something you like, or have an idea, send me a convo and we can work together to create something special for you.

Last updated on May 9, 2022
Welcome to Ravyn's Cache of eclectic ... stuff. I make jewelry, mostly, but I also do other ... stuff. You may see other items in my shop occasionally, as I tend to be poly-phasic with my arts and crafts.

Please convo or email me if you wish to exchange an item or be refunded for any reason. I'm quite sure a solution can be reached!

At this time, I only accept PayPal. However, we can probably work something out if you have PayPal issues. A Money Order would be my second choice, so please contact me if that is your preference.

I ship on standard "business days", using USPS 1st Class. The rates I've listed are based on the current rates posted on the USPS website. If I receive your order on a Friday, it may not ship untill the following Monday (or the next business day if that Monday is a Postal holiday).

These rates do NOT include insurance, which is additional . Please advise if you would like me to add insurance.

If you prefer I use some other shipping method, please advise and I will adjust the costs accordingly. Once your order is shipped, any significant amount you were charged over the final cost of shipping will be refunded.

NOTE TO INTERNATIONAL BUYERS (OUTSIDE THE U.S.): Shipping internationally can be tricky these days. I will try to get the least expensive shipping rate for you. However, I cannot be responsible for any taxes, import or customs fees imposed on your purchase by your country's government. Also, I am required to accurately list the item and its value on any customs form I complete. Please keep this in mind when purchasing from my store.

I cannot claim a pet-free and smoke-free environment, because we do have a dog, and a wood stove (we don't smoke). However, the dog doesn't wear the jewelry, so unless you are highly allergic to the thought of a dog in the room at the time of its creation, this shouldn't be a problem. Just want to say that up front!