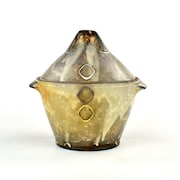 RawClay is taking a short break

Note from shop owner My shop will reopen at 10 am CT January 22 aligned with hot dish pottery sale. Thank you!

My shop will reopen at 10 am CT January 22 aligned with hot dish pottery sale. Thank you!

Growing up around the wonderful pottery tradition of Minnesota, I grew up going to studio tours and ceramic exhibtions, this is where I gained an appreciation for the humble well made local pots.

Tom's Bio:
Originally from Minnesota, Tom received a BA in Visual Art and a BS in Biology with a minor in Chemistry from Bemidji State University. Tom was an assistant to both Simon Levin and Tara Wilson. He was a summer resident and a long-term resident at the Archie Bray Foundation. In the fall of 2015 Tom began a 3 year residency with his wife Maggie Finlayson at Penland School of Crafts. Tom has received several awards and honors including, a Jerome Projects Grant, Emerging Artist Award at NCECA and Ceramics Monthly, Lincoln and Lil Street Fellowships through the Archie Bray Foundation and in the summer 2014 Tom was an Honored Maker at the Maker’s Faire at the White House in Washington D.C. Tom exhibits his work at several galleries around the nation, this includes exhibitions at the Holter Museum of Art, Greenwich House Pottery, Trax Gallery, The Pottery Show at the Old Church, Northern Clay Center and Leedy Voulkos Art Center. Tom’s current body of work is made of red earthenware and is soda fired to cone 3 with a small minimalist decorative element.

Can I see the inside or another view of a pot?

Yes. We don't take a lot of photos of an individual piece because every one of our pots needs to be photographed separately. If you need to see another angle before purchasing just message us.