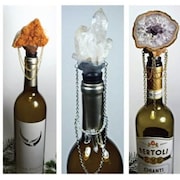 RusticByNatureDesign is taking a short break

Note from shop owner Thank you so much for visiting my shop! I am taking time to rest while trying to beat stage 4 cancer. I will be back and running in no time. Thank you for your patience! God Bless!

Thank you so much for visiting my shop! I am taking time to rest while trying to beat stage 4 cancer. I will be back and running in no time. Thank you for your patience! God Bless!

I married a geologist..... and now we here

I moved to Colorado from North Carolina in 2014 after college. I met my husband, a geologist at Colorado School of Mines, a year later. He introduced me to the wild world of geology and inspired me to focus my artistic creations on rocks and minerals. In 2017, I began crafting jewelry and wine stoppers simply as gifts until my friends convinced me to start selling them. We got married later that year and shortly after began trying to grow our family. Because I wanted to be able to stay home for a few years after having a baby, I decided to pursue the craft as a small business. Rustic By Nature was open for business! I was selling at craft shows and sold my products in three stores, but we weren't having any luck on the baby front.
After trying for nearly two years, I began to have tests and procedures that resulted in a diagnosis of a rare form of endometrial cancer at the age of 30. This type of cancer is so rare that my doctor said, "I know what you know". That was one of the scariest things I've ever heard, and I hope no one ever has to sit across from a doctor to hear them say that. This chapter of my life was just beginning, and I was terrified but hopeful. I began intense hormone therapy which became the breaking point for me to quit my full-time job, but a blessing in disguise, as it allowed me to focus all my energy on my small business. Rustic By Nature has grown since and is still growing. I create mineral wine stoppers, mineral jewelry, candles, mineral tea infusers, and I sell rare and high-quality rock and mineral specimens. I always continue to expand my product range as I want everyone to have a unique product and to have a slice of geology to take home. Rustic By Nature has kept me motivated as we continue the adventure to grow our family.