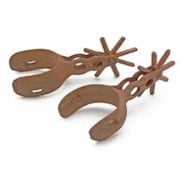 RustySpurCreations is taking a short break

Note from shop owner Hi folks! Getting ready for a shop update. Please check back in 2 weeks!

Hi folks! Getting ready for a shop update. Please check back in 2 weeks!

Many years ago, I needed something else to do in the truck while my husband was driving. I had attempted to learn to crochet from my mom, but it was a total bomb. So I thought I’d try knitting, and after a lot of cussing and dropped stitches, I did it! Knitting led to handspinning, because boy was that handspun pretty and I have this thing about doing it myself…. Which of course led to dyeing, because I love color. Then a drumcarder to make batts. And then I had to pay for all this! And so I started to sell, first on eBay, then on Etsy in my first shop Susan’s Kitchen. Life became complicated, and a move to North Idaho followed, and a full time job.
I gave that job the boot in spring of 2012 and fiber is now my full time! We've grown to 27 Angora Goats! I hope you love fiber as much as I do, and happy spinning!