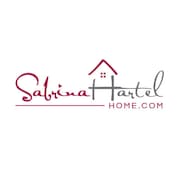 SabrinaHartelHome is taking a short break

Note from shop owner Hello and thanks for visiting! I’m working on fulfilling my current orders right now, but will be back soon.

Hello and thanks for visiting! I’m working on fulfilling my current orders right now, but will be back soon.

Creative Director and CEO, Sabrina Hartel Lonzo, of Sabrina Hartel Home is serious about her oven mitt game. "Pot holders and oven mitts are a part of home decor in the kitchen. I've seen what's out there. There isn't much… which would probably explain why I have had the same oven mitts for the past few years. There is definitely something in the collection for me. And something consumers out there can appreciate. My home decor line is fun, funky and whimsical."

Although she was born and raised in Chicago, she spent nearly 10 years in New York City, and now the suburbs of Chicago. "I've had the best of both worlds: urban life and suburban life. At the end of the day, when those worlds collide, home style is something that we all think about. When I moved to Joliet, IL a few years ago, I had a chance to start over with my decor… start from scratch."

A Joliet, IL transplant, Sabrina Hartel Lonzo, a former advertising executive, and artist, created a home decor line by accident: throw pillows, pillowcases, bedding, shower curtains, kitchen decor and soon dinnerware. "I got into painting on canvas when I moved to a new apartment," she said. "I had a spare bedroom that I turned into an art studio. I painted. And painted. But, in my studio, I had to replace the curtains every few months because my two cats would ruin them. My kitties would hang onto the curtains like Tarzan, you know; that was their thing," she gleamed. 'Then I thought, 'I'm going to make my own curtains, paint them with my own design'."

She bought five yards of loose canvas from the art supply store, laid it out onto the floor… and painted it. "I worked on that canvas for about a week. After I finished the 'painting,' I thought that the fabric would look even better on a chair, reupholstered… But that was too ambitious!" she said. "I started small, making throw pillows, and I hit the arts and crafts circuit, selling hand-painted prototypes." They were a hit!

She dreamed of opening a retail store in her new hometown of Joliet, IL or nearby. "I dream of opening a retail store, where people can come inside the store and experience fun, funky and whimsical home decor… Home decor doesn't need to be boring. And not everyone wants lace and ruffles on their pillows. I don't. My throw pillows are like little works of art on a 16"x16" surface area."

Sabrina Hartel Lonzo launched her home decor line online. "This reminds me. I never got around to those curtains for my home studio. I imagine, I will have some up by next spring."