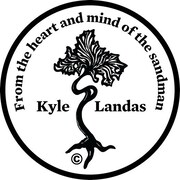 The many layers of leather artist Kyle Landas’ life have inspired him with the primal urge to bring creativity to life in a fresh, new way. Originally from a small Iowa town, old school Country resonated deeply and he dreamed of making his mark in music. But he could not then know that the path which eventually led him there would be through Hell itself.

He spent ten long years as a bricklayer; but never forgot the dream of a life made up of more than stacking mortar and clay. Like many artists, Kyle’s daily grind would run headlong into a life-changing event, from which would emerge an artist with a unique vision and voice. For Kyle, the event took the form of an onset of horrendous and debilitating pain and illness. Barely able to walk, he could not keep up the physical demands of masonry. Numerous and comprehensive medical tests returned a dire initial false diagnosis, which led his family to believe he was not long for this world. Consumed with thoughts of two young children facing life without him, Kyle feared even falling asleep lest he never awaken. Facing down his own mortality with every breath, he sought ways to channel the pain and desperation into something positive and discovered his gift.

From sleepless nights and a fascination with Waylon’s black-and-white leather-bound Telecaster emerged a skill and a medium – leather. Using typical Western-style pattern books, Kyle slowly taught himself how to carve leather. Once method had been mastered, he began designing unique and original creations that involved using traditional tools in new and innovative ways. Within a year, he designed a custom strap for Willie Nelson.

Word spread quickly throughout the music world about the leather artisan from Iowa. Demand grew rapidly. One by one, a veritable who’s who of the Country music scene called asking for one-of-a-kind custom straps. Jerrod Niemann was a perfect fit for Kyle's first major client. His sense of humor and unique style meshed perfectly with Kyle’s vision.

A simple backstage meeting led to Kyle working for two years as the private leather artist and designer in residence for a Grammy® winning musician. He reinvented the traditional concert poster, creating the artwork on hand-tooled leather – one of which is currently on display in the Country Music Hall of Fame in Nashville. The original leather poster has been photographed in ultra-high resolution and signed. Numbered limited edition archival Giclee prints are produced and available.

As Kyle’s medium of choice plays such a large role in celebrity fashion, creating custom leather vests was a natural evolution. His designs have been worn to red carpet events by Randy Houser and others, showcasing Kyle’s leatherwork and allowing him to tip his hat to legendary creators of Cowboy Couture Nudie Cohn and Manuel.

Following his artistic vision, Kyle has branched out into the world avant garde painting, creating jaw-dropping two and three dimensional leather portraits of famous faces. As with the leather straps, word has spread quickly and Kyle’s original paintings are greatly in demand. These pieces are crafted from multiple layers of tooled and formed leather set at different depths, achieving a surreal visual depth-of-field that is stunningly lifelike. Leather is the meticulously hand painted in oils and framed in a hand-crafted shadowbox. His unique paintings have been displayed at the Hank Williams Museum in Montgomery, Alabama.

And beyond portraits, Kyle creates avant garde paintings. His use of color combinations and faceless characters – something passed down from his mother, herself an artist -- conveys a darkness which challenges the viewer – the hallmark of a true artist with both a voice and something to say.

Kyle now controls the pain that once controlled him. While thankful for a full recovery and good health, he understands that had the illness not stricken, his calling may never have been found. As friend and fellow artist Keith Neltner wrote, “Sometimes you have to walk through Hell to see the light.”