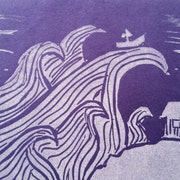 SentimentalAsylum is taking a short break

Note from shop owner I'm taking a break to deal with family matters. I should be back by the end of the month.

I'm taking a break to deal with family matters. I should be back by the end of the month.

A little snark, a little laughter, a lot of love

Sentimental Asylum began from a need for cards I couldn't find in stores, something to send to my dearest cousin Turquoise, who was dying of liver cancer on the other side of the country. I wanted the right balance: a little snark, a little laughter, a lot of love. I wanted a card that said, "This sucks." I wanted a card that didn't hold images of a life she would not have: that meant no babies, no elderly women holding hands, no suggestion that she would get well. I wanted a card that held love, but without easy sentiment. I never found it.

Two years later, I told that story to a friend, who asked if I had ever tried block printing. "I'm not an artist," I said. "I'm a poet. You do the designs and I'll write the sentiments." I took some of the skills I'd learned as a poet, like binding together small booklets (chapbooks) with a few simple stitches, and applied them to assembling the cards. I carved my first block because I thought it would be a good idea to know what the limitations of the form were.

Before I knew it, I was hooked. I started making cards to send to friends--in celebration, in mourning, and everywhere in between. I gave them away to people who I knew needed to find the right thing to say during a difficult time. My husband and I made our Christmas card and I realized that somewhere along the line I'd become an artist.

Since then, we've expanded into also block printing on clothing, on fabric (for our friend Meg at Spoolbeans, also an Etsy shop), and, recently, into silk screen designs. Some of our work is very sincere, some is sarcastic, and some--like our popular "Believe in yourself" Nessie design--can be taken either way.

Sometimes what you need to say lies between sentiment and sarcasm. That's where we like to be. I hope you like it, too.