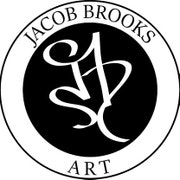 Announcement    Unique Art and hand painted items from Jacob A Brooks.
Putting art on anything that will hold still long enough.

Unique Art and hand painted items from Jacob A Brooks.
Putting art on anything that will hold still long enough.

Putting art on anything that will hold still long enough

Jacob A Brooks is an artist based out of Nashville, TN specializing in bright, vibrant art. He works in pen and ink, acrylic, mixed media and most often with paint pens. He is also known for his street painting: chalk and pastel creations created on the street or sidewalk.

Jacob spent his childhood on the outskirts of Atlanta amid a backdrop of tattoo parlors, Harley Rallies, and Super Bike races. After high school he moved to Murfreesboro, TN, a college town just outside of Nashville. There he attended MTSU and studied Recording Industry Management. There he spent his time as an engineer in the school studios, playing in various bands, jamming with all sorts of musicians, and putting art on anything that would hold still long enough. After college he packed his bags and headed to sunny Florida, where he began his love affair with the Atlantic. After a decade drying out in the Florida sun, Jacob moved back to Music City, USA. All of these influences have culminated themselves into a unique style that Jacob calls "Surf-Urban Art" taking elements from surf art as well as street art and other pop culture references.

Last updated on May 10, 2022
Thanks for stopping in! This page contains all the fun and interesting factoids you need to know when making a purchase from Jacob Brooks Art.

Got a question? Just ask! We have not ingested any Bath Salts so we will not bite.
Email: jacobbrooksart [!at] gmail.com

RTS Items:
Art should be appreciated first hand, not through a picture. If for any reason you are not satisfied with your purchase, send the piece back for a full refund. I must receive the piece completely undamaged at my discretion in order to receive the refund. Customer is responsible for return shipping fees.

Custom Orders:
Due to the individual nature of these items Custom Orders cannot be refunded. I will communicate with you through the creative process to ensure your satisfaction.

When ordering custom shoes, the buyer is responsible for knowing the correct size.

Payment is by PayPal only and expected at time of purchase for RTS paintings. The transaction will be automatically canceled if payment is not received.

Payment must be received within 24 hours of placing a custom order, or it will be cancelled.

RTS items purchased from the shop will be shipped within three (3) business days (except holidays) of receiving payment.

Custom Orders:
I aim to get your custom order to you A.S.A.P however as each item is hand painted to order please allow between one and three weeks for completion. For all customs orders, the customer will receive an email containing an initial sketch which s/he will need to approve* failure to approve custom orders will result in delayed turn-around time for the finished product.

*If for some reason, the customer is not satisfied with the sketch, we will be happy to discuss how we can better meet their needs. This will also extend the turn-around time for the finished product. If an agreement cannot be made during this process the customer has the right to cancel their order for a full refund. Once the initial sketch has been approved the order cannot be canceled.

Orders outside the US: The buyer is responsible for any additional fees that may be charged at customs.