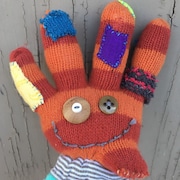 Creatures made from new and recycled socks and gloves

Announcement    Adopt a cuddle buddy, and support a great cause! Our store specializes in NēNē creatures. NēNē's are hand-made from gently-used socks, gloves, buttons and other repurposed items we find along the way. Each one is unique and special. They have lots of character and are great for cuddling.

A portion of every purchase is donated towards research of a rare genetic disorder called MECP2 Duplication Syndrome. Adopt a NēNē today for yourself or for a loved one!

Adopt a cuddle buddy, and support a great cause! Our store specializes in NēNē creatures. NēNē's are hand-made from gently-used socks, gloves, buttons and other repurposed items we find along the way. Each one is unique and special. They have lots of character and are great for cuddling.

A portion of every purchase is donated towards research of a rare genetic disorder called MECP2 Duplication Syndrome. Adopt a NēNē today for yourself or for a loved one!

Unique creatures that not only make great companions, but also tell a story

Mother/Daughter duo Kathy and Melissa discovered the world of sock animals a few years back, and they've been having fun ever since!
The idea of the "NēNē" began from a fundraising idea. A member of their family has a rare generic disorder call MECP2 Duplication Syndrome, and the family was planning an event to raise money for a reasearch project being done to help find a cure. Melissa and Kathy thought it would be lots of fun to make a bunch of NēNē's to help raise additional money at the fundraising event.

The Fundraiser was a great success, and all 20 of the NēNē's were adopted into loving homes.

...but those crazy girls didn't want to stop there! ...so they decided to open an Etsy shop to not only share their creations with the world, but to raise awareness for MECP2 Duplication Syndrome. "Nēnē's" are named after Neil Hajjar. He and others live with this very challenging disorder, and by adopting be a Nēnē, you are helping to support this cause!

Last updated on April 30, 2014
We pride ourselves in making unique creations from new and recycled fabrics, and other bits & pieces.
All recycled materials are are still in great condition.
All creatures are stuffed with new polyfil material.

If your item arrives damaged, does not arrive at all, or has a defect, please contact us.
Otherwise, we do not accept refunds or exchanges at this time.

We gladly except major credit cards and Paypal.

You can find help here:
http://www.etsy.com/help_guide_checkout.php

Most items in the shop are ready to ship. Ready to ship items are shipped within 3-5 business days of payment confirmation.

Please be sure that the shipping address on your order is correct. We cannot be held responsible for addresses that have not been updated or are otherwise incorrect, so please verify this information before completing your purchase.

If you would like a different shipping method for your item(s), please contact us for the cost.

International buyers, please take note, you are responsible for all import duties and customs charges on items you purchase. Please check with your local customs office if you are concerned about these fees. There is still the less expensive option of shipping with first class mail, but it can take up to 8 weeks or more to arrive due to customs regulations in those countries.

Please feel free to send us a message if you have any questions. Thank you again!