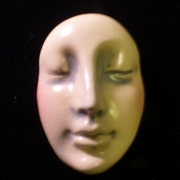 The Face of Time

Announcement    Welcome to The Face of Time. This shop represents 40 plus years of creativity and passion. (check out About section for our history: https://www.etsy.com/shop/TheFaceofTime#about) Each piece is hand made in a small studio nestled in the mountains of Oregon by my Mom Diane Briegleb. I work along side her learning the art so I can carry The Face into the future. We invite you to browse our store and be inspired to create some magic of your own.

Welcome to The Face of Time. This shop represents 40 plus years of creativity and passion. (check out About section for our history: https://www.etsy.com/shop/TheFaceofTime#about) Each piece is hand made in a small studio nestled in the mountains of Oregon by my Mom Diane Briegleb. I work along side her learning the art so I can carry The Face into the future. We invite you to browse our store and be inspired to create some magic of your own. 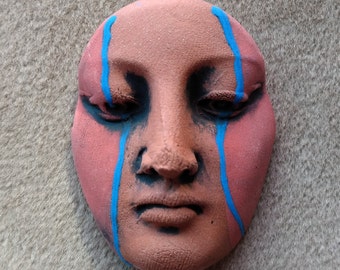 Diane Briegleb & The Art and Craft of The Face

The birth of The Face began in the early 70’s in the dusty desert town of El Mirage California, known at the time more for glider competitions than creative artistic endeavors. Diane Briegleb met the love of her life Ken, a professional sail plane pilot there and settled down to be a wife and mother to her 3 children. Little did she know that this new desert life would take her on the adventure of a lifetime.

Diane began her creative journey as many artists do, as a hobby. She had taken a raku ceramics class with her friend Kay Lanz and was inspired to try her hand at creating beads to use in her macramé (quite the popular hobby at the time). She worked with earth colored clay and began making beads. Her first designs were unglazed patterned round and tubular earthenware beads with no glaze. Her designs caught on with bead shops and designers and she quickly had a successful bead business bursting at the seams with orders. By 1974 found Diane employing 50 local woman in the area to help her create enough beads and fill her orders. She and her team were creating upwards of 3000 pieces on a weekly basis by hand. Her line grew to eventually include animals, leaves, plants impressions, fantastical creatures and Egyptian King Tut inspired pieces.

In her first phase of bead creation she designed more than 100 different styles and sold to bead stores across the United States and the Hawaiian island. The rough organic bohemian fashion sensibility was in full swing. Diane’s rustic jewelry had a solid place in fashion and was featured in Women’s Day Magazine, craft magazines of the time, the Smithsonian Institute of Washington D.C and the gift shops in Yosemite National Park.

Eventually though, disco came along. With it came gold chains and less interest in the natural styled fashion trends. Diane and her family moved to San Diego where she eventually became head jewelry designer first for Angelique Jewelry and then for Accents of California. At Angelique she created whimsical pin designs centered around people’s hobbies and interests: roller skating, skiing, cowboys and music to name a few. This new work was brightly colored and fun and had a much lighter tone then her original works. At Accents she moved into serious fashion and began designing ceramic belt pieces, earrings and necklaces. But, at some point she realized that she missed being able to have full control over her design and creation process and eventually found her way to The Face the freedom to design what was in her soul.

Diane had always been fascinated the human face and she began to experiment with creating ceramic faces. Some were simple but dramatic and some were more complex in ornamentation and glazing techniques. But, while they were similar, they each had their own their own personality, mood and spirit defined by their designs, glazes and imprints. She began using the faces in a variety of ways and also in collaboration with other designers. The Faces found their way onto kaleidoscopes, purses, necklaces, wall hangings, dolls, sculptures and more.

Over the years Diane gained a loyal following of customers that were passionate about The Face. Some people were simply collectors that would proudly admit they had a wall or cabinet or drawer full of them. While others made their own stunning creations bringing their unique passion and interpretation to The Face.

Diane now lives in a remote forested town in the mountains of the Williamette National Forest outside of Eugene, Oregon. She has a small studio to create in and kilns for firing her pieces. She has been making The Face for over 20 years. From time to time she has considered giving up the business, but there has always been something about The Face that has continued to have a special place in her heart and inspire her to continue on.

Her daughter Cija and husband Dave moved in to help her when her husband Ken passed away in 2017. Cija is now apprenticing with Diane and learning the craft of The Face. And so The Face will live on.

Last updated on April 30, 2022
Thank you for visiting The Face of Time Etsy store. The pieces in our store are made with love and care and they are infused with over 40 plus years of history, care and creativity.

Diane Briegleb is the core artist of The Face of Time and is well known for her pieces simply called The Face. She has spent a lifetime creating unique and powerful pieces that numerous artists have used in necklaces, dolls, purses and altar pieces and more. (https://www.pinterest.com/dianebriegleb/the-face-gallery/). Please visit her bio to find out more about how The Face came to be.

If you are unhappy with your purchase please contact me so that we can make it right.

Returns must be made within 15 days of receipt of package. For regular items, if you decide to return your items completely, we will refund the full cost of the item, but the buyer is responsible for shipping costs both ways.

If a custom order is returned there is a 20% restocking fee since additional time, resources and effort were required to produce your specific item.

I accept payment via credit card and Paypal.

We ship from Westfir, Oregon where we are located. While we can't guarantee a delivery date we try to ship within 2-3 days of receiving your order and will send you a tracking number as soon as we have it so you can follow your order along it's journey to you.

Custom orders may take more time to ship and will be determined before custom order is purchased.

We do ship internationally (Canada, Europe and Beyond!) Postal rates are higher for international orders because they simply cost more to ship. So that is reflected in the price. Please note that international shipping times can take up to four weeks. We will send you the tracking number as soon as we have it, but please be aware that the shipping time at that point is out of our control. Most international orders are received within two weeks, but occasionally it takes a full four weeks before the postal service gets your order to you in your country.

Your order details will include a tracking number, which just can be tracked within the U.S. and then with your national carrier. Do not be concerned if your package appears held up in the process, this simply means this is where and when the package has left the US. After it enters your own country, the tracking will register again.

In some cases shipping can take longer if it is caught up in your customs office, that is not something we can control. If you believe it should have arrived and have checked tracking, you may want to check with your local customs office to see if it's stuck there. Packages sometimes incur additional customs charges. This is dependent on your country's laws and is not something we have any control over (nor, do we know what the charges are or receive any of them).

Under special circumstances we may not be able to ship to international addresses, if this is the case and you have already paid, you will be refunded fully.

If you would like a special order or would like to order more than one of a type please contact us directly to see what we can do.