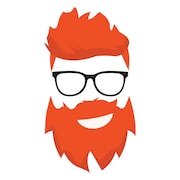 Shirts and graphics about gingers

Even if you don't like gingers, you will love the t-shirt!

In the last couple of years, we can see an increase of the Ginger population (we can see Ginger population slowly creeping) in the world’s most influential positions, such as politics with Donald Trump, music with Ed Sheeran and Prince Harry as a member of the English Royal Family. What started as just a simple joke between nine friends, quickly became an idea, which with combined effort soon blossomed into the unique brand known today as The Ginger. Every T-shirt holds a message, which is clearly demonstrated on its graphic.