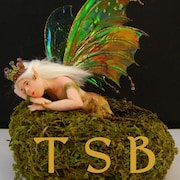 TheSilverBranch is taking a short break

Note from shop owner Thank you for your patience!

Thank you for your patience!

Where Art and Magic Meet

In 2008, I tried making a miniature baby fairy out of a packet of Fimo. What I made was rather ghastly. I threw the clay into a box and forgot it as quickly as possible. I never thought of clay again until a friend of mine asked me to make her a little faery door for her house. I lacked the woodworking tools so thought again of the packet of clay in the box.

In the five years between the monstrous baby I sculpted and that first faery door I made, I had a love affair with the faery realm. I had always been an outdoors girl - loved the forests, the creatures, the art and poetry of it all. I studied up on folklore and mythology pertaining to nature and the beings of nature - the Faery. When I stopped thinking of faeries in the Tinkerbell cliche, I began to love them and I wanted to know more about them.

I created my first faery door almost perfectly considering I had no idea what I was up to. With the leftover clay, I was encouraged by my first successful creation to try making a greenman face. It came out very feminine, but it was still a great face! No molds, no step by step instructions from a book or website. I had a sudden knack for sculpting.

I put a few faery doors on etsy, which were met with great success. I waited a couple of months, then decided to take the plunge and go all the way...

In January 2011, The Silver Branch was created in a tiny back studio in an old mill building in Wilton, New Hampshire. I named my business after the Celtic legend of the Silver Branch. Briefly, the branch was a silver apple branch given by the faeries to bards to instill sudden inspiration, skill and talent upon them. With faeries as my inspiration, and my sudden success with clay, I felt it was the only fitting name possible.

Since TSB was started, I have been on a whirling wind of adventure. I taught myself how to sculpt whatever I wished to create. I never used molds and pride myself on it. I never took classes. I never watched videos. I felt the clay intuitively and let my imagination (and the faeries, of course) guide me. I created my own original design/line of gnomes and also designed, created and copyrighted my own line of "Naturally Shed Faery Wing Jewelry".

The Silver Branch launched it's very own little brick and mortar studio/shop in November 2012! Located in the same little mill I started in, you can now visit us at 29 Howard Street, Wilton NH. See www.TheSilverBranch.com for more details.

Last updated on May 9, 2022
Welcome to The Silver Branch! Here you will find enchanting one-of-a-kind creations which are all hand sculpted and hand painted by one artist. Molds or templates are never used in the sculptures, so each work is truly unique and magical!

I accept Paypal, Credit Card payments and Etsy gift cards. If you cannot use any of these payment methods, contact me and we can discuss other options for payment.

Payment on an order must be made within 24 hours of purchasing or the order will be declined and the listings returned to the shop. If you would like to reserve an item within the shop for longer than 24 hours, contact me through etsy conversation.

I work very hard to get orders out as soon as possible. Non-custom orders are generally shipped the next business day unless otherwise noted in the listing. Custom orders vary depending on what they are - shipping estimates are in the listings. If you have any question on shipping, feel free to contact me.

Within the USA, the estimated shipping time is 3-5 business days from the date I send the package out (not including holidays). Packages outside the USA generally take up to 2 weeks in transit however, some countries can take up to 4 weeks due to their country's customs procedures.

***If you would like priority, 2 day or overnight shipping, please contact me BEFORE purchasing the listing so that I may adjust the shipping cost accordingly.****

Larger sculptures and orders are insured with delivery confirmation - both at no additional shipping cost to the buyer. International shipments can only be protected by the customs forms, sorry.

~Custom Orders~
I do accept custom orders! Simply send me an etsy conversation. I am happy to consider even the most off the wall ideas.


WHOLESALE INFORMATION:
I offer a small wholesale discount to brick and mortar shops (no online sales) on my copyrighted line of "Naturally Shed Faery Wing" Jewelry, "Key Guardian Dragons", and copyrighted line of pocket gnomes. I reserve the right to decline any wholesale request. Please send any inquiries via Etsy Convo and I will be happy to discuss the terms.