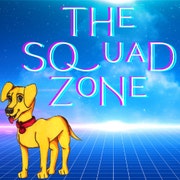 Nashville, Tennessee
5 Sales | 5 out of 5 stars

✨We're running sales through the ENTIRE MONTH of December! Everything is 20% off until Christmas week, when everything will be 50% OFF!!!🎄

📽Scroll down and watch our series' cool animated trailer! 🍿

💚This is where anime's coolest critters run wild! Hope ya like it!💚

🈺 Welcome to The Squad Zone!
🌟NOW AVAILABLE: "The Squad - Freedom Rings" - the first book in "The Squad" Christian-fantasy book series!!!📚🎉

✨We're running sales through the ENTIRE MONTH of December! Everything is 20% off until Christmas week, when everything will be 50% OFF!!!🎄

📽Scroll down and watch our series' cool animated trailer! 🍿

💚This is where anime's coolest critters run wild! Hope ya like it!💚 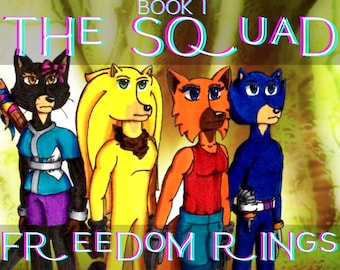 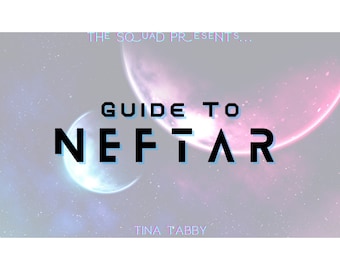 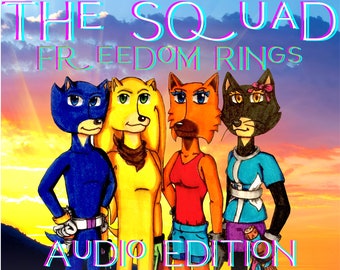 In Dark Times, Heroes Will Rise...

"We are the Squad, and nothing will ever change that!"

When freedom rings, they answer! The Squad - aka STPS - consists of Tina the wolf, Porter the hedgehog, and Sy the cat. The Squad's mission forever: to serve their LORD God. The Squad's mission while alive: to free their world from the barbaric practice of slavery.
As the story begins, Tina, Porter, Sy, and Porter's twin brother Sapphire - all who work on a farm together and surprisingly share the same birthday - escape from slavery. But years later, they realize that slavery has only GROWN since they escaped! Knowing that they must rescue their people from the injustice they themselves were once ruled by, the team sets out to end slavery. When Sapphire hands off his role to Tina as "leader" of the Squad, she turns the Squad into a team of abolitionists that ought to be reckoned with. As the fight for freedom - and the team of freedom fighters - grows, new enemies and challenges rise up that the Squad is ready to face. With countless adventures awaiting them, the Squad can't seem to avoid all the action - but why would they WANT to avoid it?!
This inspirational Christian fantasy Manga book series and anime audio series is a great source of truth, inspiration, action, adventure, epic fantasy, and entertainment for all ages!
🌟HOPE YA LIKE IT!🌟

What is "The Squad?"

"The Squad" is a Christian fiction Manga book series (although it's more "Manga" in terms of cover art than anything else), although we also have some special "anime audio" series as well! "The Squad" is aimed at ages 9-14, but is a great series for anyone to enjoy! 📚

How will I receive "The Squad" items?

All "The Squad" items from TinaTabbyDesigns are digital! They won't be shipped to you - instead, they're available to you immediately after purchase! Once you've purchased an item, click "Download" to officially get them! They'll appear in your "downloads" folder on your computer, or (if an audio file) will begin playing on your iPhone or other handheld device! 📱

Is "The Squad" an anime or Manga series?

It's both! "The Squad" is predominantly a Manga book series (although the "Manga" term is directed toward the cover artwork than the actual theme), although the audio edition of "Freedom Rings" and a few "Squad Specials" are anime . 📖

What genre is "The Squad?"