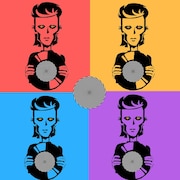 Announcement    Welcome to Vinylmugshot we specialize in all types of vintage vinyl records such as Beatles, Led Zeppelin, Elvis, David Bowie and much more. Sit down relax and dig through some stacks.

Grab Coupon Codes below for money off your order!
(Effective 11/22/17)

Welcome to Vinylmugshot we specialize in all types of vintage vinyl records such as Beatles, Led Zeppelin, Elvis, David Bowie and much more. Sit down relax and dig through some stacks.

Grab Coupon Codes below for money off your order!
(Effective 11/22/17)

THE START OF AN OBSESSION
I went to a record sale at the local college and discovered incredible artists on vinyl that I had never seen or heard of before. That day started my obsession with vinyl. Started collecting and years later I still can't pass up a stack of vintage vinyl. I have been buying and selling on EBay since 2000 with over 12,000 positive feedback. I took a look at Etsy, liked what I saw, and decided to bring my vinyl gems here.

There are detailed descriptions of our vinyl grading system below. A couple of things to be mindful of when considering record grading: We are not able to play test all records. There are manufacturing defects that are not able to be detected visually. If by rare chance you discover such a hidden defect or any other problem, return the item and a refund will be issued once the defect or problems have been confirmed.

NM: (Near Mint)
Nearly new condition. The record or jacket appears to be un-played and displays a very minimum of handling wear.

VG: ++ (Very Good)
A record that has a few visual imperfections that will not affect the sound.

VG+
More surface marks than the VG++ grade. The record still has a minimal amount of play wear with more than a few audible imperfections.

VG
The record will have more surface scuffs and marks than the above grades. Expect to hear some surface noise and a few clicks or pops here and there.

VG-
The records will have some deeper audible scratches. There will be more consistent clicking and popping than the VG grade and play without skipping.