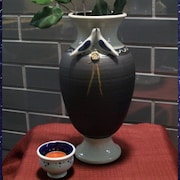 WhiteDoveCeramics is taking a short break

White Dove Ceramics exists to bring hope and encouragement, joy and inspiration into the lives of those who acquire my ceramic art and who might learn the story of overcoming it portrays.

learned the trade of pottery growing up behind the Berlin Wall. Denied a college education for refusing to pledge allegiance to our Communist regime, I turned to the trades and arts instead. Deprived of many freedoms and liberties, I still experienced art in its most original form; as a means to express ourselves and spread a message.

As a 16 years old, I had the great fortune to become a personal apprentice of Christian Richter, one of East Berlin's most known ceramic artists at the time. An outspoken and fearless peace activist Christian Richter had been jailed for using his art to oppose oppression and injustice and to convey a message of hope, faith and freedom.

Christian Richter had been trained by Hedwig Bollhagen, Germany's most famous and internationally known ceramic artist who would later receive the presidential medal (Bundesverdienstkreuz) for the way her work had influenced and shaped German culture. (She often called herself my "pottery grandmother.")

When the Peaceful Revolution started in 1989, our studio provided the East Berlin churches with our unique Peace Candle Holders and Peace Pendants that were used during the protests. We often used white doves as a symbol. The Communists could not suppress birds. Yet many people recognized the greater power the white doves symbolized which gave them hope that we could overcome.

Carrying burning candles and singing hymns people came out of the churches and marched into the streets. With symbols of peace they approached the soldiers that were lined up in the streets, armed and waiting for orders to shoot. One message rang loud and clear through the streets during these tense months of protests. Light is stronger than darkness. Love is stronger than hate.

It remains a historic miracle: Not one shot was fired. Instead, the Peaceful Revolution brought down the Berlin Wall, ended the Cold War and brought us freedom.

Today I tell my story of overcoming through my pubic speaking, my instrumental piano music and my ceramic art. The peace pendants we created are now part of the permanent archives of the National Museum of German History. (See photo.) The white doves remain the trademark of my ceramic work to remind us even today of the greater hope we have and the promise we have to overcome.

To commemorate the 30th anniversary of the fall of the Berlin Wall this year, I have opened a small Etsy store to offer for sale many of the exhibition pieces I have toured with for the past decade as I shared my story in America. The proceeds are being used to support my speaking and music ministry to tell my story.

When Etsy prompted me to create a name for my store, the first thing that came to mind was: "White Dove Ceramics."

Yet more than just telling a story of past history, I draw inspiration from life and nature today and use my work to continue to bring hope, joy, comfort, encouragement and inspiration into the lives of people.