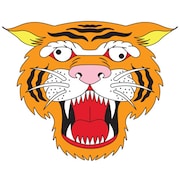 WildTigerPins is taking a short break

Note from shop owner I’m currently on vacation, check back after July 8th!

I’m currently on vacation, check back after July 8th!

I started making buttons in 2004, selling sets on ebay of movies and bands I liked. Growing up in LA, I had lots of friends in bands and friends at record labels, so I started making custom buttons for friends. I've made buttons for The Casualties while on warped tour, Angel City Outcasts, Broke Til Thursday, American Eyes, Lysol Gang, The Boys and Girls Club of Boston and Continental, just to name a few. I'm currently trying to get myself out there more and actually advertise around the greater Boston area, because it's where I've been living for the last 4 years. I take great pride in the making of buttons. I hardly ever get artwork that is "button ready", so I spend a lot of time making it work. No one apparently understands the whole square in a circle thing doesn't work too well if there's not a bleed. But I make it work flawlessly. I print the artwork on Premium Presentation Paper, so it's way better quality than most of those other buttons out there.