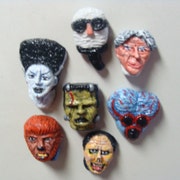 Monsters and much more

Hand-made clay Monsters and much more by Yokai-John........

Yokai-John has been selling his OOAK handmade art-work since 1996.
Yokai-John presently resides in Kyoto,Japan.
About Yokai-John(formerly known as J.Ro):
the Yokai-John story all starts back in about November 1996 when I began selling my hand-made self taught art-work(sculpture,etc.,etc.,etc.) in Manhattan NYC's Village(both East &West). I started off selling chess sets(fantasy themed chess pieces made from metal which I cast from molds,which I would then convert into original figures with Millaput plumber's putty) to the Village Chess Shop LTD(in the West Village). In the following months I started looking for other places where I could share and sell on consignment my handy-work. My sister,we'll call her Miss M,suggested I try a place called Its,A Mod,Mod World(1994-2006) on 9th street between 1ave and ave A(which was run and owned by Rick Smith & Kei Yip,two very artistic guys who inspired me very much to create the things I create to this very day). I first met Kei,who took my first consignment there some 60mm Dragons I had casted,and suggested that I break up my chess sets and sell the pieces separately.A few days later I came back and brought some chess pieces to sell separately and also some clay mini busts(mostly Pans,Devils,and Skulls,some of my earliest clay sculpts)and I met Rick,who took everything and asked me to bring more.Over the next few months I got to know Rick & Kei rather well(especially Rick) and eventually Rick invited me to make my art out of the basement(Art Dungeon) of Its A Mod,Mod World after they moved to a bigger shop on 2nd Ave between 5th & 6th streets(during this time I also started selling my sculpture in other shops like Earth-Sea,Trash and Vaudville NYC,Zito Studio Gallery,Rudy's Hobby Shop in Queens,River-stone in Connecticut,and a few others).From there I was Inspired by Rick,Kei,Chloe(who managed the store/gallary some days),and many other visitors and friends of the shop to create all sorts of new,wonderful,and sometimes monsterous things out of this crazy and beautiful shop(July 1997-February 2006).After the shop closed in February 2006,I pretty much stopped actively selling my art(although I did continue creating) for a few years until July 11,2009 when much like a Youkai from Japanese folklore I returned from the(artistic)dead transformed as Yokai-John and I opened my self-named shop here on Etsy(yay!) and here I continue on today.

All sales are final but if there should be a problem with your purchase, please do contact me right away through convo/message here at my Etsy shop to let me know what it is. I really do want you to be happy with your purchase(s) and I am sure that, together, we can figure out a solution that works for both of us through either store credit or exchange.

I accept payment through Paypal. Payment should be made and completed at the time of sale.

Yokai-John ships Japan Post EMS,fast ( about 2-4 business days) and safe(signature required) delivery with tracking unless otherwise requested.
If your country is not one of the countries listed for shipping on a piece(s) you would like to purchase,please let me know and I will be glade to edit the listing(s) for shipping to your country if possible.
Re Shipping times for Made To Order/Custom Order items:
If your Custom order is needed by a certain time please convo/message me before purchase for a shipping date estimate.