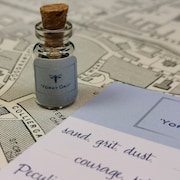 YorkyGrit is taking a short break

The 'Yorky Grit' worker bees are enjoying a little holiday before the excitement of Christmas!

The 'Yorky Grit' worker bees are enjoying a little holiday before the excitement of Christmas!

Inspired by the local colloquialism of ‘Yorkshire Grit’ and named after the Pennine sandstone which for centuries has been used to grind corn – ‘Yorkshire Grit’ is also a state of mind, an elusive virtue which speaks of courage in the face of adversity and of the human spirit refusing to be ground down.

Fondly described as the ‘Cinderella’ of her family and while our Lady Brigante ekes out a living from her miniature creations while working hard as a company director to increase the profile AND profit margin for Death in a Chocolate Box – she is also a care giver for her infirm mother and a younger brother who struggles with dementia.

That she has an irascible spouse, two high-maintenance felines and a gaggle of hens who also demand her care and attention and a large house to run merely adds to the romanticism of this sorry tale.

However, earlier this year during one cold, grey UK lock-down afternoon, and with an income running on negative, no access to a research library; and with a painful wrist tendon having thwarted her plans for some model design and clay sculpture - our Lady B retreated to her lair.

And while poised before a blank computer screen her telephone rang and as she answered call after call of bad tidings – she opened an email from the IPO warning her of a potential threat to her brand.

And just like that – all of her precious creativity and those stories waiting to be shared, now vanished into the ether along with her exciting plans AND motivation.

Now, ever faithful to her Yorky nature, she was in need of a cup of tea and a chocolate biscuit or two.

As she waited with heavy heart for the kettle to boil, she remembered the tale of the soprano singer Lesley Garett from the BBC series Who Do You Think You Are? in which Lesley talks candidly of her emotional struggle upon leaving home for the first time and of receiving a handful of Yorkshire grit by post from her mother by way of reply.

And having gone in search of a glass bottle from her collection of miniature curios and now with some local grit to hand – she bottled it and carried this miniature back upstairs to her desk.

And there this little bottle of Yorky grit has stayed to this day – like a faithful friend, a witness to that difficult day and a powerful reminder that this too shall pass.

One brighter morning weeks later and while gazing a this little bottle of grit – our Lady B was suddenly smitten with the desire of sharing this miniature and all that it embodies with the rest of the world.

And so, having invested some of her savings in a huge bag of locally sourced grit, logo design, a collection of tiny bottles, another website, some beautiful keepsake cards, personalised ribbon, an array of cute vintage labels, a special stamp or two, some gloriously colourful recycled shredded paper and a selection of attractive kraft pouches – ‘Yorky Grit’ was thus created!

From a day of despair to dare to dream…

This Site is operated by Death in Chocolate Box Limited.

The operator of this Site has created this Privacy Policy to explain the information we collect and how we use that information from individuals who access our Site at etsy.com/shop/YorkyGrit.com.

You are giving your consent to the collection, use and disclosure of your personal information as set forth in this Privacy Policy when you submit personally identifiable information through this Site.

The Information We Collect:

We request specific personal information when you place an order on this Site as follows:

Without this information, we will not be able to process your order.

We do not collect personally identifiable information about you unless we have your consent to do so.

We use Google Analytics in order to better understand the needs of the visitors to our Site.

Google Analytics is a technology service which help us better understand the experience of our visitors and this enables us to build and maintain the services we offer on this Site.

Google Analytics use cookies and other technologies to collect data on your behaviour and device identifier including IP address, browser information, geographic location and your preferred language.

We may place a cookie on your computer’s hard drive as a means of storing information and offering you a more personalised browsing experience.

A cookie is a small file containing data and which helps us to identify and track visitors and their use of our Site. A cookie contains no confidential information.

Visitors who do not wish to have cookies placed on their computers should adjust their browsers to refuse cookies before using our Site.

However, if you reject our cookies you may still use the Site, but the use of some of the features may be limited.

Various security measures such as SSL are implemented in accordance with industry standards to protect the security of your personal information as well as sensitive information.

Our Site is hosted by Etsy Inc. and is subject to full compliance with Etsy Inc's Privacy Policies and all General Data Protection Regulation.

Your user name and comment may be published on our Site.

You have the right to request that your comment be deleted from our Site.

We offer links to other informative websites for the enjoyment of our visitors. These websites may operate independently of this Site and are subject to policies you may wish to review.

We reserve the right to amend this Privacy Policy at our discretion and in accordance with applicable legislation and any such amendment becomes effective on the date of publication to this Site.

Your continued use of this Site after any change to our Privacy Policy constitutes your acceptance of such a change.

Last Updated: August 2021
Etsy prohibits the use of buyer information for unsolicited messages. See our Privacy Policy for more info.

Thank YOU for your interest in 'Yorky Grit'.

With every glass bottle 'Yorky Grit' filled, sealed, dressed and packaged by hand here in the City of York – this is a unique miniature.

The carefully selected grit inside every 'Yorky Grit' will vary from bottle to bottle.

Every bottle of ‘Yorky Grit’ will be packaged using shredded tissue paper and a pillow pouch and finished with our unique 'Yorky Grit' ribbon.

A token of provenance with our unique stamp of approval along with a keepsake card will also be included.

We use only recycled paper products.

As a small business we aim to be transparent about our costs and no profit is derived from the delivery of our products to you as our customer.

Every ‘Yorky Grit’ will be carefully packaged prior to posting.

Proof of postage will be obtained.

This is a collectable miniature and as such is NOT intended as a toy OR suitable for children.

We hope you will be delighted with your unique 'Yorky Grit' - however, if there is a problem do let us know so we can put things right for you.

About Death in a Chocolate Box -

Death in a Chocolate Box is a company limited by shares and registered in England.

Our company number is 12282903 with a registered address of Anvil Lodge. Thanet Road. York. North Yorkshire. United Kingdom. YO24 2PH.

Death in a Chocolate Box offers walking tours around the City of York along with a selection of thoughtful gifts in the on-line store, including our unique 'Yorky Grit'.