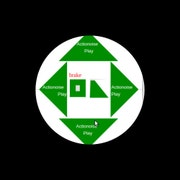 Announcement    Welcome to my shop! Electronic kits proposed are originally handcrafted to remotely control motors, relays and actuators through a simple video call, as well as to range with creativity by adding new functions to them through prototyping boards (such as Arduino or Raspberry) related to the pinouts of the Actionoiseboard. For complete schematics and codes guides please consult the website: https://www.actionoise.com
For any doubts do not hesitate to write me.

Welcome to my shop! Electronic kits proposed are originally handcrafted to remotely control motors, relays and actuators through a simple video call, as well as to range with creativity by adding new functions to them through prototyping boards (such as Arduino or Raspberry) related to the pinouts of the Actionoiseboard. For complete schematics and codes guides please consult the website: https://www.actionoise.com
For any doubts do not hesitate to write me. 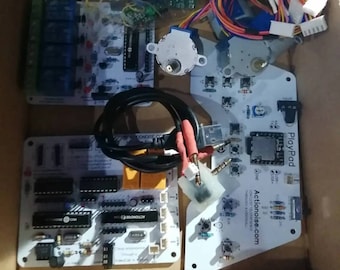 I am passionate about modeling and electronics. At the sight of a box of obsolete cell phones I could not resist the idea of ​​experimenting and reusing them. The material exhibited in this shop is the result of the union between different passions such as music, electronics, photography and programming, because I think that electrical signals can be manipulated by transforming themselves into painting in the form of pixels into sound in images, movements and codes, or viceversa.
The proposed boards capture different musical notes that can also be described as audio frequencies, decoding them in different actions
via motors or servos. The audio frequencies which set in action these
motors are carried by the video call audio channel, easily made on the
famous social platforms: Facebook, Instagram, Whatsapp, Skype etc.

Thus was born the Actionoiseboard and the Playpad to remotely control the board and all the other electronic boards that can be interfaced with it.

About the word "Actionoise": is the union between "Actio" which in Latin means action and noise which in English takes the meaning of noise so in a few words "The action of noise" (Actionoise) allows you to perform videocall in motion (animated video calls).

The triangles that represent the logo are 4 icons of the play button of a common audio player, arranged in different positions to indicate the direction in which the motors will move when the different audio tracks are pressed and then executed. The central is the stop button and then another play button. The green color instead represents the possibility that you can have with an actionoiseboard to recycle many electronic parts for assembly, especially old smartphones and notebooks.

Browse the shop and discover the Actionoiseboard.
This original electronic kits will let you do video calls as it has never been used before.

See this Seller Handbook article for a sample privacy policy you can customize for your shop.
If you ship to the EU or offer your listings to buyers there, you're required to have a GDPR-compliant privacy policy by 25 May, 2018.
Privacy policy
Dear Customer, On May 25th 2018 the EU Regulation 2016/679, known as GDPR (General Data Protection Regulation), will come into force in all Eurozone countries. Based on the requirements of the RGPD this privacy statement describes how and when I collect, use and share information when you purchase an item from us, when you contact us or when you use our services through Etsy.com or its related sites and services . This privacy statement does not apply to practices of third parties that do not depend on us and which we do not control, including Etsy or third party services accessed through Etsy. For more information about Etsy's privacy practices, see the Etsy Privacy Statement.
WHEN WE TREAT YOUR DATA:
they are necessary to provide our services, such as when we use your information to complete your order, resolve disputes or provide assistance;
if necessary for compliance with legal obligations or a court order or in connection with a legal action, such as storing information about your purchase if required by tax law; and if necessary for our legitimate interest, provided that your rights or interests do not prevail, such as 1) provide and improve my services. I use your information to provide the services you have requested and in my legitimate interest to improve my services; and 2) Compliance with the Seller's Rules and the Etsy Terms of Use. I use your information as needed to comply with my obligations, pursuant to the Seller's Settlement and Etsy Terms of Use.
GIVEN THAT:
- we do not operate with third party companies for shipping operations
- We never send advertising or promotional material
HOW WE TREAT YOUR DATA:
- we do not disclose them to any other company or transfer your data to other servers / databases
- we use them exclusively to communicate with you in relation to the order placed. For example: for a request for customization, general information on the product, delay in delivery, return, exchange.
We will keep your personal information only for as long as necessary to provide you with our services. However, we may be required to retain such data to meet legal obligations, resolve disputes. Generally, we store your data for the following period of time: 1 year.
CONTACT:
For any questions and clarifications please write to: admin@actionoise.com
Etsy prohibits the use of buyer information for unsolicited messages. See our Privacy Policy for more info.