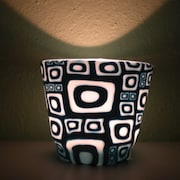 Bring a new colour to your lives....

ArzuMusa is taking a short break

Note from shop owner Hope you all are having a wonderful summer! I am spending some time with my family until July 16.

I will continue to respond to inquiries about my items.

Thank you so much for all the continued support.

Hope you all are having a wonderful summer! I am spending some time with my family until July 16.

I will continue to respond to inquiries about my items.

Thank you so much for all the continued support.

Your story in one sentence.

Born in Ankara (Capital of Turkey) in 1967. She moved to Istanbul in 1987 and graduated from Business Administration Department at İstanbul University in 1991. After university education, Arzu had dealt with building up her own business in İstanbul, the biggest and magic city in Turkey for 11 years.

In the summer of 2002, suddenly, Arzu decided to escape from this magic but very crowded metropolis to realize everyone’s dream that is to live in a small town away from crowd.

Having two wonderful dogs and a cat, she opened a new page in her life in a beautiful house with a garden having vision of mountains around in a small, beautiful and lovely town, that is Fethiye, Mugla in southwest of Turkey.

She got a job at a wonderful holiday villages in Turkey, Hillside Beach Club as Human Resources Specialist and she worked there for 7 years. Always having interest in artistic and fine arts, while working there, she was thinking of create new and special hand-made things but never knew it was a viable career option.

Then, in summer of 2007, one of her friends introduced Arzu with polymer clay’s colorful and magic world and this fascinating clay became her addiction. The material, polymer clay is a sculptable material based on the polymer polyvinyl chloride (PVC). It usually contains no clay minerals, and is only called "clay" because its texture and working properties resemble those of mineral clay. It is sold in craft, hobby, and art stores, and used by artists, hobbyists, and children as well.

And in the same summer, an unexpected guest came to the town to see her after 15 years. He was her very first platonic lover in the past. At the end of 2008, she resigned from her job, decided to focus on creating and selling her own creations in the rest of her life. Second time, she came to İstanbul together with her dogs in 1st of January, 2009 and they are married happily after....

At their lovely flat, Arzu had designed one of the rooms as her working place. She had supplied all necessary accessories and created her own home office.

She creates designs inspired by history, local people’s daily lives, etc and makes very unique piece of jewellery, accessories, home decorations by using polymer clay, glass, wood and metal. After creating very unique and elegant objects by mixing different colours of polymer clay, Arzu takes their photographs and put them in her website to present them to lovely people in the world and that is the most exciting side of the craft.

She believes that ideas are floating on air. When your mind is engaged with anything that you love and like, you collect the ideas from atmosphere around. She gets inspiration from almost everything on earth. And if some one in somewhere is happier than before by having or using her creations, that is the most beautiful thing in the world. Now, some ones in the USA, Canada, Belgium, Netherlands, Australia, Germany, France, England, Greece, Norway live with Arzu’s creations...

If you would like to find out more about ArzuMusa:

The products are wrapped with bubble wrap and put in a box or a padded envelope depends on their size.

Your order will be shipped after payment. I will inform you by convo when I shipped them, and ask you to inform me back when they arrive, so that I can breath freely again.

International orders will be sent via Turkish Post Airmail and usually take 5 - 10 days to arrive
Turkish customers are welcome to contact me about my bank details:
arzu_musa [!at] yahoo.com

Customers are responsible for all custom fees and taxes.