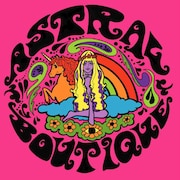 Swinging Through The Stars

Announcement    Check out my Instagram for flash sales (of items not seen here on Etsy)! https://instagram.com/astralboutique/ ....and shop Astral Boutique in person at Cosmic Shark in Grass Valley.

My shirts, mugs, stickers, and buttons have moved to their own new shop on Etsy! AstralWeekend.Etsy.com Come check it out and enjoy. xo Sasha

Check out my Instagram for flash sales (of items not seen here on Etsy)! https://instagram.com/astralboutique/ ....and shop Astral Boutique in person at Cosmic Shark in Grass Valley.

My shirts, mugs, stickers, and buttons have moved to their own new shop on Etsy! AstralWeekend.Etsy.com Come check it out and enjoy. xo Sasha

Not All Those Who Wander Are Lost

THANK YOU ETSY FOR MAKING ME YOUR FEATURED SELLER! Holy Moley Guacamole!
http://www.etsy.com/blog/en/2013/featured-shop-astral-boutique/

The California Dream, for me, is about natural fabrics, beautifully draped silhouettes, creative embroidery, and love of color... all of which compliment the free-form lifestyle that we live on the edge of the continent. I specialize in pieces from 1960s and 1970s, when West Coast flower children had an intense love affair with Art Nouveau and Victorian motifs.

I have taken a very windy, circuitous road to end up at this happy home on Etsy, where I get to play with history and beauty for a living.

I always knew I was an artist, but for a long time it seemed impossible to blend my love of literature, film, dress-up, and magic into one "coherent" form. I studied film and animation in college in Boston, The Netherlands, and San Francisco, then set out on an exploration of the so-called Real World. This meant that I was a nanny, a shuttle bus driver, a substitute teacher, a security gate guard at the San Francisco Zoo, a pizza delivery girl, and a Santa Elf at the mall.

When I wasn't at work, I was following my favorite band (The Cure) around the world, studying yoga, playing in a rock group called The Sexy Vacations with my best girlfriend, making zines, de-constructing billboards, back-country camping to hot springs, dancing in my birthday suit at Burning Man and the Rainbow Gathering, making pilgrimages to Cadillac Ranch, and living in a van by the beach in San Diego that was spray painted with giant flowers and couldn't go in reverse. My hair was purple and red and orange and pink and blue and black and blonde and long and bowl cut and bobbed and bald. I dressed as a goth, a tomboy, a hippie, a fairy, and I even tried to Fit In once or twice (which was, of course, a total failure).

Every once in a while, I would make efforts at selling my own art: hand-painted t-shirts, collaged votive candles, succulents in painted pots. Doing things in person, the old-fashioned way, was super hard for me cause I was so painfully shy, but I didn't have a computer until 2004 and had never even BEEN on the internet.

At some point, I decided that if I had no idea what to go back to "regular" school for, I should just educate myself in the subject that interested me the most: earth magic. I started studying Herbalism, and got totally obsessed- I ended up going to every Herbal School in Northern California. I learned about how the body works, how to make medicine and healing food, and how to meditate with plants. Most importantly I learned that the invisible world of energy and spirit is much larger and more powerful than our little physical reality, and magic is darn real.

After that, the Nature bug had bit me hard, and as life had come to one of those fabled crossroads, I convinced my husband to move to the woods with me.

Now we are in Grass Valley, in a kind of artists- colony-mixed-with-rednecks world up in the very rural Sierra foothills, making music and art and- at last!- I am a working artist, thanks to the magical, creativity-exploding world of Etsy.

Me and my husband/best friend Chris and our black cat Lil Bits live in a rickety rented house that looks like it was decorated by drunken elves, which is usually messy because it's strewn with music gear and costumes.

We have made all of our life choices based on the path of the heart, and while we might not be rich in material goods, we are very rich in spirit. We like to keep everything in circulation in the right way, so we buy local, support our local Co-op and farmers, and share things with our neighbors.

My current obsession is traveling in Spain as a touring musician- I'm hoping to go on my third trip in 2017!- and generally diving into experiences and cultures that make my curiosity explode.

Supporting my via my Etsy store *literally* means the world to me, so thank you to all of my loyal customers, and a big HELLO to my friends that I haven't met yet.

You can convert inches to centimeters here:
http://www.manuelsweb.com/in_cm.htm

Please go by my detailed clothing measurements to assure a proper fit for yourself, and remember to leave room for movement. If you have any specific sizing questions, or any other questions at all, I am super Convo-friendly-- just shoot me a message! I love to help. (-:

I accept Paypal and credit cards.

I always combine shipping to save you money. I ship my items within the U.S. by Priority Mail (unless the item is very small or is heavy, like a coat or shoes), which takes 2-3 business days. The shipping price includes Delivery Confirmation, which allows you to track your package. You do NOT need to sign for your package when it arrives. If you would like Insurance added (for a small fee), please contact me and I am happy to set that up for you.

I ship worldwide and always combine shipping. I ship by First Class International Mail, which takes 2-4 weeks to reach most destinations. This service is not insured or trackable. If you would rather use Priority International Mail (6-10 business days arrival time, insured and trackable) instead, just let me know, and I can calculate the new cost for you.

Also please note that your country may charge an import tax, duty fee, VAT (Value Added Tax), or customs possessing fee. If you are charged a fee upon receipt of your package this due to your countries laws. This is NOT an additional fee I am charging. Each country has different rules regarding these fees. If you need more info regarding import taxes and fees its best to contact your local postal office or refer to their website for more info.

I do my best to process my orders immediately. I usually ship within 24-48 hours on weekdays. If it is going to take me longer for any reason, I will Convo you and let you know.

Please keep in mind that I have no control over the mail. Sometimes due to weather or holidays the mail may take longer to arrive than normal. Also if you are an international buyer sometimes packages can take a while to go through customs.

Please be aware that I cannot refund you the cost of a lost package- once it leaves my hands, it is in the hands of the Post Office and not my responsibility any more. Once in a great while, packages DO get lost/stolen. I am happy to insure your package for an additional fee.

Come connect with me- I am super friendly! (-: