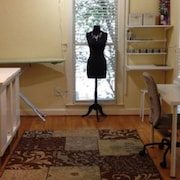 Announcement    Welcome to Bella Bolsa Designs. Bags can be customized to your specifications. Feel free to contact me with any questions, bellabolsadesigns [!at] gmail.com.

Welcome to Bella Bolsa Designs. Bags can be customized to your specifications. Feel free to contact me with any questions, bellabolsadesigns [!at] gmail.com.

Reinventing the Past One Stitch at a Time

My Grandpa Ralph came to this country from Turkey. He brought with him Turkish folktales and his love of music. To make ends meet, Pappou, as we all called him, went to work in The Garment District in New York. I imagine he must have learned to sew from my Great Grandmother, Reina. Although I never met Reina, both my mother and daughter are named for her. In the only picture I’ve ever seen of her, she was sewing.
​
Pappou began working in a factory and later created his own line of sportswear affectionately named after my aunt, uncle, and mother. I would imagine Pappou dreamed of passing his skills down from one generation to the next.
​
Unfortunately, like most children, my mother, aunt, and uncle had other ideas and went on to pursue other interests. None of them ever learned to sew.

When I started sewing five years ago, I inherited my grandfather’s scissors. When I am at my sewing machine, I often imagine him standing over my shoulder, smiling his infectious smile, and saying, “hija mia, my beautiful girl.”
​
Pappou approached everything he did with heart. It is from this place, my heart, that Bella Bolsa is born. Bella Bolsa literally means beautiful handbags, in this case beautifully handcrafted handbags designed with ephemeral fabrics and textures that celebrate our ability to take solace in nostalgia and create the everlasting from fleeting moments.