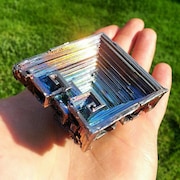 BismuthCities is taking a short break

Note from shop owner Currently making my way across the United States collecting new specimens to use as seeds for the bismuth crystallization. Will be back in the Spring with a line of new pieces & fresh new website!

Currently making my way across the United States collecting new specimens to use as seeds for the bismuth crystallization. Will be back in the Spring with a line of new pieces & fresh new website!

Bismuth Cities is a Pittsburgh based art project founded & operated by Anthony Arcuri. Anthony’s main focus is on manipulating the element bismuth, an iridescent oxidizing metal capable of solidifying into perfectly straight lines, right angles, stair step patterning & pyramid structures through precise melting & cooling—Tearing a hole in the veil of our reality & exposing its mathematical nature while displaying its beauty & elegance.

Anthony became drawn to bismuth from its tendency to form pyramid structures reminiscent of the pyramids of ancient Egypt & Mesoamerica. This modern form of alchemy quickly became an obsession & has made way for an artistic expression that has come in the form of pieces small & large, jewelry & large collaborations. No matter the form, the curious nature of Bismuth Cities creations can be seen & felt.

Bismuth (Bi) is one of the elements from the periodic table of elements. It is a chemical element & pentavalent post-transition metal. Bismuth crystals or "hopper crystals" are formed when the element in its pure form is melted down to a liquid & then cooled carefully with the right timing & temperature control. When crystallized, bismuth is shown to form perfect straight lines, right angles, detailed step formations & intricate pyramid structures, often resembling futuristic/alien cities. Little is known as to how bismuth forms this way. Bismuth in lab-grade crystalline form is rare & even rarer in nature.

The color of the crystals is caused by a thin layer of bismuth oxide, that is formed when bismuth comes in contact with oxygen at the right temperature. The color can be any color of the rainbow, but in general some colors are more abundant than others.

As if bismuth wasn't already awesome at face value, it is also the most diamagnetic metal known to man. This means it repels magnetism enough to cause magnets to levitate. (example: https://www.youtube.com/watch?v=YRSgFvGXPYk )