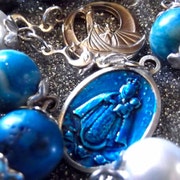 Announcement    07/16/18: BOVEDA BEADS IS CLOSED UNTIL FURTHER NOTICE. The arthritis in my hands makes me unable to make rosaries in a timely manner anymore. If I manage to get things under control, I'll be back. In the meantime, thank you for eight years of awesomeness! Blessings, Marisa~

07/16/18: BOVEDA BEADS IS CLOSED UNTIL FURTHER NOTICE. The arthritis in my hands makes me unable to make rosaries in a timely manner anymore. If I manage to get things under control, I'll be back. In the meantime, thank you for eight years of awesomeness! Blessings, Marisa~

Beads for the Orishas

Beads have always fascinated me. I learned to make inexpensive plastic rosaries for the missions many years ago, and that led to the desire to make nicer ones for friends and family. When I was initiated as a priest of Yemaya in the Lucumi tradition, I discovered that I had joined, among other things, a grand community of beaders. Godparents create elekes, the beaded orisha necklaces, for their godchildren all the time. I knew that old-school santeros still honored the saints that were long associated (I avoid the word "syncretized") with the orishas after the first slaves were brought from Africa to Cuba; Santeria was born of necessity. I seem to have a special resonance with the saints, and the germ of an idea was born. Why not create traditional five-decade Dominican rosaries dedicated to a particular saint, but in the colors of the orisha with whom that saint is associated? For instance, a rosary for Yemaya would feature images of La Virgen de Regla, but would be composed of beads in her colors of blue, white and silver. And so, Boveda Beads was born.

Last updated on May 10, 2022
Thank you for shopping at Boveda Beads! We offer FREE SHIPPING anywhere in the US and only $7 per order (no matter how many items you order) to ship internationally!

Returns will be accepted for damaged merchandise only. If something needs repair, please let me know and we'll see if I can fix it!

PayPal is my preferred method of payment. You can use PayPal for credit/debit card payments and also directly from your bank account. Due to an unfortunate incident with an unscrupulous buyer, I no longer accept money orders. Please, no personal checks!