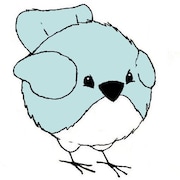 Announcement    Welcome! If you're looking for fat birds you've come to the right place. ♥ All items are ready to ship.♥ ☆ Find a cute gift for yourself or a loved one! ☆

Welcome! If you're looking for fat birds you've come to the right place. ♥ All items are ready to ship.♥ ☆ Find a cute gift for yourself or a loved one! ☆ When I was 12 I decided that when I grew up I would make a line of stuffed animal bears that wear skirts and flowers behind their ears and each would have some clever name. I even had a sketch book of all the ones I would start with.

Well, here I am doing exactly what I wanted to do when I was a 12 year old kid. It is the best job I've ever had because, as they say, if you love what you do you'll never work a day in your life.

You might wonder where the name Bubbletime came from. It is named after a darling pet Oranda goldfish I once had named Little Bubble or Bubbletime for short.

Last updated on April 30, 2022
Welcome to Bubbletime, I hope you find something you like that would make a charming gift for yourself or a loved one.

Payments can be made through PayPal or Direct Checkout (you can pay by credit card without using PayPal.)

If you're new to Etsy and need help going through the payment process these links will take you through the steps:

How do I purchase an item on Etsy?
http://www.etsy.com/help/article/339

How can I purchase an item with a credit card through PayPal?
http://www.etsy.com/help/article/361

How do I pay with an Etsy Gift Card?
https://www.etsy.com/help/article/3088?ref=help_search_result

All Virginia residents will be charged 5.3% sales tax.

☆ I ship two or three times a week or next day if I can. All domestic shipping is First Class Mail with Delivery Confirmation.

☆ For international orders: The buyer is responsible for any tax, customs or duty fees and please understand, I will not mark false information on the customs form.

At this time I'm not accepting any wholesale or consignment orders.