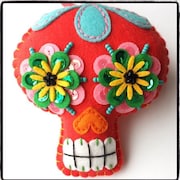 Calaveras and Corazones now has a Tumblr page! Please follow/subscribe to be kept up to date with photos of new items and behind the scenes studio shots. Want to know a little more? As always, you can read about my work at CalaverasAndCorazones.com

Hope to see you there!
c/s
alex

Calaveras and Corazones now has a Tumblr page! Please follow/subscribe to be kept up to date with photos of new items and behind the scenes studio shots. Want to know a little more? As always, you can read about my work at CalaverasAndCorazones.com

Hope to see you there!
c/s
alex

Calaveras and Corazones was born out of something a good friend and I used to call "Chicana Craft Day." And... Chicana Craft Day was just what it sounded like: an entire day set aside for getting together at my kitchen table and working with paint and clay.* Well... that and drinking cafecitos and eating pan dulce**... and chisme (gossip).

OK. So Chicana Craft Day was really about the chisme.

It all started with a good friend (and graduate school colleague) telling me that she didn't do anything creative because an art teacher had told her that she wasn't "artistic" when she was a little girl. I was outraged. What kind of awful teacher would tell a kid that they weren't artistic?! Incensed, I set out to prove this so-called "educator" wrong. "Anyone," I told her, "can be creative. You just have to be fearless."

And so Chicana Craft Day was established.

Once every other week, we met in my kitchen and I pulled out my art supplies to play. My friend discovered that she had a deep well of creative reserves and artistic talent to spare... and I discovered that I really, really missed making things with my hands. Graduate school had a funny way of making me think that I didn't have time for anything that wasn't related to my coursework... and my life was seriously lacking balance. Chicana Craft Day brought that balance back. It nourished me.

My Chicana Craft Day comadre has moved to a different state, so we don't get together anymore-- but I still make time to make things with my hands. I've come to understand that "creating" is as important to me as eating, sleeping... maybe even breathing.

I named my shop "Calaveras and Corazones" in honor of all of those afternoons spent laughing and creating at my kitchen table. It literally means "Skulls and Hearts." "Skulls" because so much of what we made featured sugar skulls or Day of the Dead skeletons and "Hearts" because the room was always full of love.

The pieces in my shop are all made with a lot of corazon. I put a lot of love into everything I make. I hope that my work makes you as happy as it makes me.

* And glitter. Lots and lots (and lots) of glitter.
** coffee and Mexican sweet bread

Last updated on May 9, 2022
¡Bienvenidos a mi esquina del mundo! Welcome to my Etsy shop!

The items in my shop aren't just arts and crafts-- they're part of my culture, my family, and my heart. I hope you love them as much as I do!

Read more about what I do at www. CalaverasAndCorazones.com

All of my items are handmade. Because of this, slight imperfections are to be expected. This is what makes handmade items so charming, que no?

I do my absolute best to represent the items I have for sale accurately. If you are unsure of anything, or have any questions about an item, please ask me before making your purchase. I am happy to answer any/all of your questions and/or provide additional photos.

If you are unhappy with your purchase, please contact me within 3 days of receipt of your order to let me know and I will work with you to make your shopping experience in my store a positive one.

I regret that I can only refund shipping fees if an item was shipped to you in error or if it was damaged in transit. In these cases, I will refund your shipping fees and reimburse your costs to return the item to me.

PayPal is my preferred method of payment, but I am also happy to accept Visa, Mastercard, American Express, and Discover via Etsy's secure, Direct Checkout system.

Delivery Method:
Orders shipped within the U.S. will go out via First Class Mail with delivery confirmation.
* USPS Priority and Express shipping are also available. Please contact me before you make your purchase so that I can adjust shipping costs on your order.

Timeframes:
Items ship within 3 days after payment is received. If you need your order rushed, please message me to let me know and I will do my best to accommodate your request.

Shipping Refunds:
If the estimated shipping fee exceeds the actual cost of shipping by more than $2, I will refund the difference to your PayPal and/or credit card.

Shipping Materials:
I try to recycle shipping boxes whenever possible. If you would rather not receive your order in a recycled shipping box, please let me know when you place your order and I will accommodate your preference.

International buyers:
- Please message me for shipping rates before you make your purchase.
- Please note that buyers are responsible for any and all duties and customs charges that may be incurred.

Like my product photos? Thanks! I worked really hard on them.
Please note that I retain all rights to my images and that I am not relinquishing those rights by selling you the item(s) they represent.

Please feel free to pin anything you like to Pinterest (though I would appreciate you not pin my things to DIY-type boards) and share the images with your friends/family. I only ask that you make sure you link back to its original source.