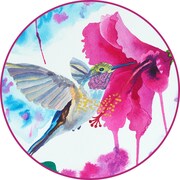 Carissa Joie Luminess (née Erin Williams) began her professional career as a full time artist in 1985 upon receiving her MFA in painting at the State University of New York at Albany where she was awarded with the Presidential Award for Excellence in Art. After a bi-coastal upbringing between NY and CA, including studies at the Academy of Art in San Francisco, Erin returned to the west coast to settle down in a lush, picturesque valley outside of Eugene, OR.

Married with 2 children, she spent the next 20 years raising her family while daily painting the natural bounty of their small farm and surrounding countryside. Her art became the family business, supporting them with sales from regional galleries, national art festivals where she won many awards, and a line of notecards that were carried in shops nationwide.

In 2006, following the message from a dream, Carissa moved to Santa Barbara where she lives with her current partner in an enchanted ocean front home where she paints the semi-tropical beauty that surrounds her. She has found a new following of collectors here and is very involved with the thriving artist community. Her designs have been licensed as fabric, gift wrap, tabletop ware, wall decor, greeting cards, tile murals, wooden puzzles and more.

In 2012 during a magical trip to visit her son who lives in Maui, she was called to create a home away from home on the island to paint the spirit of Aloha. She makes regular sojourns to the island of Maui where she is represented by Village Galleries in Lahaina. Carissa has been blessed and enriched by her art every day of her life and is grateful to all who have supported her on her path as an artist.

It is Carissa's wish to create art filled with joy as a reminder of the joy inherent in being Divine creatures on this beautiful earth.

Last updated on January 23, 2023
Thanks so much for visiting Carissa Luminess Art!