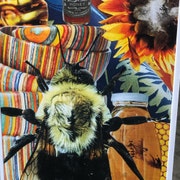 I received a notice in 2009 from Continental Airlines that they were going out of business and my airline miles would be turned into "Miles for mags" In fact as a consolation, my miles would have double the value when used to redeem for magazine subscriptions. I was interested so I took a peek at the website. I saw many magazines that I was interested in so I began ordering subscription after subscription, it seemed like I was never running out of the points, so I kept ordering...finally after maybe 10-12 subscriptions, I had used my points.

What have I done? That is what I asked myself when it seemed like I received a magazine each week if not a couple, I didn't have time to read these magazines, I had 4 kids and maintained a pretty busy lifestyle, so I began piling these magazines in various spots in living room on the bottom shelves of built in, until... I ran out of space. I then decided I would schlep these magazines up to my attic, out of sight, out of mind right? Wrong, I felt guilt over them, how could I have all these beautiful and expensive magazines, still in wrapper, hidden away in the attic? I made a plan of attack, by this time, it had been a year and I kid you not, I had hundreds of magazines.

I took out my calendar, blocked 3 days out in a row, to dedicate to the task at hand, my plan was to go through each magazine, and tear out any recipe I liked and any household tip I might try, I had an accordion style organizer and I had made tabs for each kind of recipe, Mexican, Greek, Vegetarian ETC. As I ripped, I placed in corresponding slot, this felt amazing, now I could recycle these magazines without a guilty conscience, but as I went through these magazines, I also started tearing out pretty pictures that made me feel good, I didn't know why and I had zero plan for them but I began organizing these as well by type, animals, fashion, flowers etc. Now I had skeletonized magazines and heaps of useless (at the time) pictures.

I recycled all the ripped up magazines, and made a vow to never get a subscription again, I used the recipes I cut out, I used the helpful tips, but what about these images?? I began cutting them out of the page, using fine tiny scissors, carefully cutting each image from the page, this was very satisfying and I would cut for hours, each night cutting and organizing these images until one day, I began to assemble them into collages, I would do themes, color themes, animal themes, image stories, it was so satisfying!

I then began to photograph the collages and created cards & party invitations, my methods improved and I started scanning my images and added photo corners to affix the photo to a blank card. I sold to a few stores and then lost my confidence and only made cards for friends, family, who of course always told me how much they love my cards and how I should sell them again, I chalked it up to being family supporters, its what they are supposed to do.

But then, one of my good friends who is a wildly talented jewelry designer, began to encourage me to sell on Etsy, telling me that people will love them and that they are so unique, I decided to give it a try, I am here because of my cheerleader of a friend and honestly I am happy I listened, I am feeling creative again and I have confidence that the same feeling I get from these cards, you too will experience. They are one of a kind, they tell a story and they are mental health therapy for me. Thank you for reading all of this! Kimberly