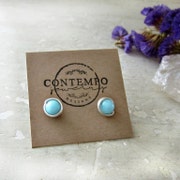 ContempoJewelry is a Star Seller!

ContempoJewelry is taking a short break

As most creative souls - I was in love with the concept of creating and selling my work. But was that realistic? I have bills, a mortgage, car payment...

I made jewelry for fun, sold to friends and at local craft shows. I had big dreams of selling in galleries, selling at high end art shows, maybe even owning my own shop one day. I worked full time as a waitress in a high end restaurant. I made good consistent money and I believed that was important, but I was very unhappy.

One day I had a co-worker tell me about his father-in-law. He was a successful pencil artist. His work became very popular after his death, but he was poor during his lifetime. Now people make documentaries and books about him.

I mentioned how jealous I was, didn't want to be "waiting tables". He told me I was living the "stereotype". This is what was "expected" of people like me - we wait table and hope for that "big break".

Right then and there I realized that I have control of my life and my future. I can't sit around and hope for a great opportunity, I need to create it. I set goals and began working on achieving them. A few months later, I quit my job and took my jewelry full-time.

It has been 5 years and I opened a brick + mortar shop in October 2011, just off the beaten path in the historic village of Boalsburg, PA called Contempo Artisan Boutique. I love that my community supports handmade and small business. I hope to continue to grow.

Last updated on May 10, 2022
All items are handmade, listed and shipped by yours truly. I have quite a few interests and love learning new things. In turn, you will find a unique blend of accessories.

I am happy to take on custom orders, bridal orders, restringing and also adjustments.
I can always change a design to suit you, whether it be length, style of earwire or different kind of metal.

All of my products are shipped from a non-smoking location.

I enjoy creating my products and my mission is to provide the best experience for my customers. Stop back often!

Please be sure you love your piece before you buy it, and feel free to message me to ask any and all questions. If you are unhappy with your purchase, you can return the item for a refund. Shipping costs will not be refunded. I am happy to resolve any problems, please contact me. You have 7 days upon receipt to contact me, and make arrangements for a return. Buyer is to pay return shipping. I can not replace pieces that have been damaged through improper use or care.

No returns or refunds for custom ordered pieces or anything that needs to be ordered from the seller. Returns/refunds are only accepted from my regular online jewelry line.

Payments are accepted through Paypal and Etsy only. All payments are expected within 24 hours of purchase or the item will be relisted. If you need more time than that, please message me - I am more than happy to do what I can!

If you're new to Etsy -welcome!!
Here's a guide to help you through the checkout process;
http://www.etsy.com/help_guide_checkout.php

All orders are shipped 1st class, it is the most economical method. If for any reason you need to change the shipping method, please contact me.

I ship only to addresses provided by the etsy invoice. If you wish to have an item shipped elsewhere please be sure to EDIT your shipping address when you send payment! Also, please send me a message that you wish the order shipped to a different address.

If you don't receive the package in 3-5 business days or the tracking is showing an issue, please let me know as soon as possible to try to resolve the issue.

Please contact me if you have any questions or concerns. I enjoy receiving emails so I can improve my store and my products.

International Buyers - You could be subject to customs tax on anything imported into the UK from Non-EU countries valued at more than £15 including an £8 handling fee from Royal Mail for processing the customs tax. To learn more check here - www.hmrc.gov.uk/customs/post/internet.htm

All jewelry is shipped in a recycled kraft paper box, perfect for gift giving. Free gift wrapping available, please make a note for me. Sizes, colors, stones, ear wires, shapes can all be customized.

Please contact me for any custom orders. I look forward to creating what will work for you.