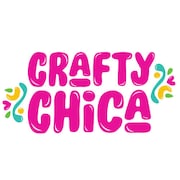 craftychica is taking a short break

Spreading the gospel of glitter!

My husband and I vowed on our wedding night in 1990 to live doing what we love, for me that was writing and making art. Within three years, we hand made hundreds of Latinocentric home decor and jewelry items for 300 stores & boutiques around the country. Becoming a sweatshop wasn't exactly the dream we had envisioned.

I took a job at The Arizona Republic covering entertainment. One day the editor asked me to write a weekly craft column, she knew about my artsy side hustle.

My column became nationally syndicated by Gannett News Service and I joined a local TV show.

Something still itched at my spirit. I knew I was meant for a bigger purpose. I yearned to promote positivity through creativity.

Hello, 2003, hello CraftyChica.com! I blogged every night about juggling a full-time job, raising kids, being a band wife and running an online art business. I made a lof of new friends in the cyber crafty universe.

People noticed. My site built traction as the only U.S. Latinocentric DIY brand. My first book deal came, as well as national press. In between raising two kids, a full-time job, my art business, web site, and authoring books - I went to night school for my BA!

Thank goodness for my family who supported me in every way! I have no idea how I found the energy, but I finally received reporter’s pay after doing the work for so many years. It empowered me to think bigger in all other aspects of my life.

I wrote my first novel after everyone went to bed at night. It was a complete failure at first, I was laughed at. But I tried again. and again. And again until I finally scored a two-book deal to write women’s fiction.

I left the paper in 2007 to pursue Crafty Chica full-time! SCARY move but I’m glad I did it.

My national product line debuted in 2008 at Michaels Stores. It was the FIRST Latina-designed, Latinocentric line in a major craft retail chain!

Seven craft books, two novels, multiple products lines, tens years of the Crafty Chica Cruise, - all of it is going strong! There have been peaks and valleys of experiences, but overall I LOVE THIS PATH. I've learned the key to success is persistence - and embracing social media.

Evolving. Reinventing. Sharing. GETTING MY LIFE!

My tips for you:
Pinpoint what you want, make a to-do list and timeline. Even if it doesn’t work out, you’ll know you tried it. And then try something new. Research, take notes, feed your brain. Keep trying until you hit that one thing that is meant for you. It’s out there, but nothing will happen unless you take action. Break a sweat. Fall. Embarrass yourself. Get up and see what went wrong and do it again a different way. Be humble. Give to others, offer your help unconditionally, but first make sure you have your own bases covered! Be open for constructive criticism, even when it stings. Learn and grow. Thank the people who doubt, hurt or mock you, they offer the fuel we need to be even more abitious and cross the finish line! SLAY.

What not to do:
Don’t expect everyone to help you, they are working on their own path. But what does come your way, take it as a pleasant surprise and pay it forward. Don’t expect miracles on your first try, every time. Don’t delay your plans due to perfection, it’s never gonna happen unless you get moving. Progress comes before perfection. Don’t “fake it til you make it.” These days in social media, people can see through the smoke and mirrors of trying to look like a VIP when you are really a WIP (work in progress). Instead, like my friend Vickie Howell says, “Make it til you make it!”

This is a hard one I struggle with daily: Try not to overpromise and underdeliver.

Don’t try to buy instant success, it means more if you earn it!

Stop making excuses or placing blame, either you want to do something or you don’t. Whatever you procrastinate on, it’s not that you don’t have time. Be real with yourself - it’s because it is not a priority to you. If you really want it (whatever IT is), make the time to get it done!
xoxoxo

And now for the official bio... Kathy Cano-Murillo is an author, artist & founder of the award-winning site, CraftyChica.com. She has worked with Coca-Cola, HSN, HP, WordPress, Disney & many others. She is a former reporter for The Arizona Republic. She has authored nine books, two of them novels. She has been featured in The New York Times, USA Today, Huffington Post, Buzzfeed + mor

We want our original art that has been handcrafted just for you to bring smiles, not tears. We offer a 15-day money back guarantee. All we ask is that you notify us immediately, send it back to us. As soon as we get it, we will happily issue a refund or exchange.

We're easy. We use PayPal.

I LOVE THE STUFF I BOUGHT, BUT IT ARRIVED DAMAGED, WHAT NOW? No worries. You can always send it back and we will fix it for you.

Expect to receive your order within 7-10 days.

I SAW SOMETHING I LIKED A WHILE BACK & NOW IT'S GONE. WHAT HAPPENED? We're artists, you know. Every so often we "retire" items to make way for new ones. If you see something you like,pick it up because it may be gone at a later date.

WHERE DOES THIS STUFF COME FROM? DO YOU HAVE A FACTORY? No way, Jose. The two of us create each item by hand in our beloved Phoenix living room-turned-art studio (all while watching hours and hours of cable TV). We literally buy the supplies, make it, glaze it, pack it and ship it all by ourselves. Have mercy!


CAN I USE YOUR IMAGES FOR SOMETHING SPECIAL I'M WORKING ON? Submit your request in writing, as we will review it on a case by case basis. ALL images are copyright protected and are NOT to be lifted for use of any kind without written permission.

WILL YOU CREATE A SPECIAL IMAGE FOR ME? Talk to us! We'll negotiate a price, depending on size and detail needed.

I'VE READ ALL THIS & STILL CAN'T FIND MY ANSWER Darn! We thought we covered it all! That's OK, you can contact us at kmurillo [!at] gmail.com and we'll help you in anyway we can.