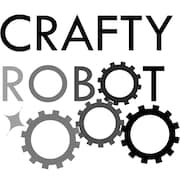 craftyrobot is taking a short break

Crafty Robot, Or, A Series of Accidents

Much to my mother's dismay I never had much interest in learning to sew until, during a semester abroad in college, I befriended a fellow U.S. student who made her own clothes by hand. She patiently taught me some basic hand stitches and the fundamentals of garment construction as we puzzled our way through hours of German television.

Back in the States, I quickly became obsessed with making clothes and costumes for myself and the occasional friend, but never thought of selling my wares until one fateful Christmas when a friend hosted a stocking exchange party where guests were matched up with another person for whom we made and filled a stocking. I don't remember what I put in it, but I clearly remember slaving over the 32-pattern-piece, hours-in-the-making, 3D prototype of what was to become the Monster Stocking. It was a hit with the recipient and other guests, and after several requests to make more, I drafted a simplified 2D pattern and launched my shop.

I continue to make a limited run of Monster Stockings each year, along with housewares and accessories that reflect my love of mixing genres and repurposing vintage materials. Here again, the accidental and serendipitous is important: the found textile that resonates with an idea I've been mulling over and allows me to envision something new.