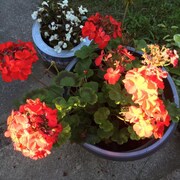 cryptical is taking a short break

Note from shop owner Life is temporarily intruding on my work with the shop. Thanks for stopping by!

Life is temporarily intruding on my work with the shop. Thanks for stopping by!

Pastels and pencil with a focus on human emotion and the natural world and quality vintage finds.

As a child, drawing, painting and creating were as much a part of "play" as riding my bike or romping in the park. I spent hours creating my own paper dolls, complete with their own wardrobes. As a teenager I drew imaginary worlds and people, influenced by my favorite sci-fi and fantasy stories. They covered my school notebooks and binders or scraps of cherished drawing paper. I also drew my friends and family, the natural world around me, the mundane and the beautiful. My influences were observations of my daily life, my mother's small garden, my boyfriend watching television, the latest fashion that I dreamed of owning, our dog sleeping.

For the majority of my life my artwork has remained a conduit of emotions, my own and those around me transferred to form on paper, images of love, grief, joy, fear and hope. During the 1980's I focused on commissioned pieces that mirrored the emotional life and journeys of people and their relationships, the celebrations "life moments", the joys of birth, of marriage, the vibrant excitement of musicians plying their craft, the memorialization of deep loss. My works became keepsakes, celebrations, markers and reminders. During the 1990's I channeled my creative energies towards larger, acrylic works through decorative painting and murals. I created numerous large scale murals for children's rooms and nurseries utilizing original imagery drawn from classic fairytales and children's stories, again celebrating life's special moments. I created entire rooms using various decorative styles and techniques for homeowners and businesses, including: vibrant colored tropical flora and fauna; a Spanish influenced "room with a view" incorporating stucco walls and a large portal opening to the shores of coastal Spain; a wine cellar of twisting vines entwining an ancient window and the soft fields and blue skies of Tuscany; a large scale, impressionistic, triptych garden for a conservatory.

In 2012, after a long hiatus, I returned to my roots and began working on a smaller scale. I picked up my beloved pencils and pastels once again. In a world increasingly influenced and engulfed by technology, I began a series of miniature pieces influenced by medieval and renaissance artists. Using watercolor washes, pencil, colored pencil and pastels, my focus became the faces of ancient peoples, whose lives, as real and meaningful as our own, played out in a very different world. During the past year I have continued to work with pastels, graphite pencil and mixed media, once again focusing on translating the variety of human emotions and everyday life through portraits. In addition, I am working on impressionistic pieces which reflect the natural world around us, the beauty in our own backyard.

I sell vintage - retro and cool - stuff that I find on my travels or have carefully collected over the years. I also now sell hand-crafted items produced in my Studio.

The world is a strange place, filled with wonders. If you want something to wear, read, keep or collect, buy it and enjoy it now. You never know when the comet might hit.

Short Policy Items: I accept Direct Checkout, PayPal, and money orders. Remember that you don't need an account to use PayPal; they'll do credit cards and e-checks. I ship within four days of payment clearance, and have a very straightforward return policy. At this time I am only shipping within the U.S. That may change if I get enough interest in our goodies from overseas. Default shipping is Priority Mail Flat Rate plus a minimal handling fee.

Thanks for taking a look. I hope you find something cool!

This is easy: If you don't like it, return it within ten (10) days at your expense for a full refund, less original shipping and handling. No questions asked. I think the stuff is neat. But I'll take it back and someone else can grab it.

I accept PayPal, personal checks, or money orders. Remember that via PayPal you can use a credit card or e-check without needing a funded PayPal account.

If you pay by personal check, your item will not ship until the check has cleared. But I promise to check clearance status in a timely manner so you don't have to wait too long.

If you need to cancel your order and have used PayPal, I will create a return credit as quickly as possible. If you have used a check or money order, I will return the un-cashed item or, if it has been cashed, reimburse you via return check.

We ship to the U.S. only. Sorry, but I tried other countries a while back on some auctions at another site, and there's no price we could set here that would compensate for the loss of personal time. [Seriously. You're welcome to beg if you're in, say, the U.K., and simply must have some piece. But I have a fiver that says you'll run screaming when you see the out-of-policy handling quote.]

Shipping will be standard Priority Mail Flat Rate with a minimal handling fee. If you want another method, insurance, or confirmation, I'll adjust the final pricing accordingly.