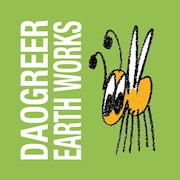 Works Of Art Made Exclusively On This Planet

Works of Art Made Exclusively on This Planet

Yep. That's right. I don't make my stuff anywhere else.

Well, that little fella on the right is my friend Daogreer. He rarely speaks, but when he does, he speaks entirely in symbols. He finds that he can cover a wider range of meaning that way. He also always faces to the left. He's quite a particular little bug; he likes things the way he likes them, and he's slow to change.

What kind of bug is he? That's a difficult question to answer. He has six legs, like an insect, but only two body segments rather than three. He definitely has wings and antennae, but those are certainly not compound eyes. I've tried asking him, but he only replies in symbols - he's a cryptic little bugger.

Though not frequently seen in color, when he is feeling colorful, he is that lovely marigold shade you see here.

Of course, his all time favorite color is green.

His name can be a little difficult to pronounce, but it should end up sounding like this: ( DOW - greer )

Daogreer and I have been friends for a long time; we met back in 1994. Daogreer is my business partner, so even though his name is tricky to spell and difficult to pronounce, the name of the company will always be Daogreer Earth Works.

The Earth is my home, and it is the only home I'll ever know - mostly because space travel frightens the living daylights out of me.

That said, I do as much as possible within my power to make environmentally friendly choices in my daily life, and I shall inflict those choices on you, should you choose to become my customer.

What does that mean for you? Your order will most likely come in reused packaging. If it is fragile, it will be protected using packaging that has come my way in the past, or alternative padding such as plastic grocery bags, paper from my recycling bin, or scraps of fabric.

Items that arrive damaged will be replaced when possible. Other returns and refunds will be assessed on a case-by-case basis depending on the item and the reason for the claim.

Orders will be shipped upon receipt of payment via credit card or PayPal through Etsy's checkout system.

All shipping is done via The United States Postal Service for several reasons:

1. It is environmentally friendly. The vehicles used to transport your mail to your post office box or place of residence will be traveling to those locations daily regardless of other circumstances. It requires no extra fuel as it would for a UPS or FedEx truck to make a trip down your street.

3. The United States Postal Service is a service provided by the federal government and supported by our tax dollars. We pay for the service whether we use it or not.

Every effort will be made to use re-used or recycled shipping materials.

All items are constructed in a furry-pet-free and smoke-free space.

Google "Daogreer Earth Works" to find me elsewhere on the web.