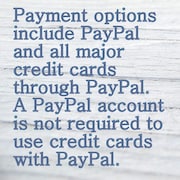 DarkRide is taking a short break

Note from shop owner Hello and thanks for dropping by!
Dark Ride will be closed for a while. We are moving house and shifting locations, and expect to be out of our minds with stress for a couple of months.
Please come back after Christmas, when we have recovered and life will have hopefully settled down.
All the best to you!

Hello and thanks for dropping by!
Dark Ride will be closed for a while. We are moving house and shifting locations, and expect to be out of our minds with stress for a couple of months.
Please come back after Christmas, when we have recovered and life will have hopefully settled down.
All the best to you!

I've always been a crafty gal. The jewelry making, though, surfaced from a desire to collect. I wanted to get my hands on all the gorgeous Czech glass I was introduced to here on Etsy. I began making jewelry primarily because I wanted to play with Czech glass. I continue because there's a lot of glass out there.

This is a Dark Ride. My shop's name is a reference to a sign on the set of an old TV show. I always took it as a comment on life, in that context, but it also resonates with my excursions into popular culture. I enjoy the dark rides -- Gothic and detective fiction, horror narratives, and, particularly, vampire stories -- in popular narrative, graphic novels, video games, on film and television.

My interests have influenced my studies. I recently obtained a Master's Degree in Popular Culture. My areas of study? Detective fiction and vampire narratives.

The dark rides of popular culture also influence my assemblages. I dip into literature, fairy tale, music, television and film, and borrow from times past and imagined for inspirations. I work with antiqued metals primarily because of its ability to evoke another time. I work primarily with Czech glass with Picasso finishes because it is so freakin' awesome.

Last updated on May 10, 2022
The item pictured in the listing is the item that will be sent to the buyer. All items pictured are ready to ship.

Is there a problem? Please don't hesitate to contact me! I'll do my best to work out a solution that is agreeable to you. The one-of-a-kind nature of some of my works, may preclude replacement.

Items must be returned for refund. Returns must be arranged within 14 days of delivery.

I offer PayPal and Etsy Payment. You do not need to have a PayPal account to choose PayPal.

VAT is NOT INCLUDED WITH PURCHASE. Legally, I cannot pay it for residents of VAT collecting countries nor can I collect it for VAT collecting governments (like the UK). If you are from one of these countries, you may still have VAT (Value Added Tax) due when you receive your package.

Packaged with loving care and recycled and/or recyclable materials, and posted by regular mail service within 24 hours of receipt of payment.

Please, expect anywhere between 3 to 28 days to receive your package, depending on your location. I am shipping from Canada.

Typically, I use regular mail service. The cost for shipping is included with purchase in Canada and is a flat rate of $6 in the US and all other international locations. I offer two upgrades -- tracked and expedited. The option to choose will be available during the checkout process.

If, by some crazy postal miracle, your shipping works out to be less than I have estimated by more than $1.50 CDN, I will refund the difference through your payment processor.

The buyer is responsible for any fees, customs charges, taxes or tariffs originating from within their own country.

You many contact me via etsy's convo function or email me at darkride4 [!at] gmail.com.