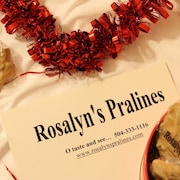 Taste of New Orleans Pralines For All Occasions!

DeliciousPralines is taking a short break

Note from shop owner Due to health related cirrcumstances, "Delicious Pralines" will be temporarily closed. We ask for your prayers and well wishes as Rosalyn works towards a full recovery so that she can get back to bringing you delicious pralines. Thank you for your continued support.

Due to health related cirrcumstances, "Delicious Pralines" will be temporarily closed. We ask for your prayers and well wishes as Rosalyn works towards a full recovery so that she can get back to bringing you delicious pralines. Thank you for your continued support.

As a child, it seemed like an all day event. My mother would make candy for us as kids and would fill the ice bucket with this delicious candy. I've been making pralines since the age of nine, because it was an anticipated snack in our family. My older sister and I would laboriously stir the hot pot, while cautiously trying to avoid being burned, in anticipation of producing this delicious outcome of what we called "pecan candy". Most of the time, because of its consistent production, it was candy "without the pecans". As I grew older, the love I had for this distinct taste of "pecan candy" grew also. Many opportunities of partaking this New Orleans brand were presented. I particularly remember the Stieb family, whose home my parents would visit on a regular basis, would have this three-tiered candy dish loaded with the most delightful- looking pecan candy daring me and my siblings to help ourselves to. Mrs. Stieb, the most cordial and generous lady, who was the patrol lady at a nearby school in the neighborhood, was known for her candy apples. Going to her house was like going to a restaurant where fried fish and potato salad were the entree' and that delicious- looking pecan candy perfectly seated in that three-tiered candy dish was the not offered yet offered dessert. With roots in Vacherie, Louisiana, which is known for great creole cooking, Mrs. Edna Stieb was an all around cook in the neighborhood. As the years passed, the tradition and improvement of making pecan candy have continued. As others have partaken of this delicious confection to the point of purchase for Christmas gifts and just to enjoy, Rosalyn's Pralines was born.  New Orleans Praliniere Legacy became a focal point when I enrolled to college in 2009 through 2014 where I obtained a degree in business administration. Chanda Nunez, a former student at University of New Orleans, who was referenced to me by now deceased Professor Michael Mizell-Nelson, had done her thesis on "Reinterpreting New Orleans African-American Praline Vendors as Entrepreneurs." This article peaked my interest in the history and lives of the praline vendor. The rich history and heritage of this much anticipated confection that was and is a continued tradition of African roots has much to be desired. It is refreshing to know that what one is doing, is an extension of her ancestors and village and has always been a natural part of her upbringing.