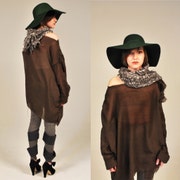 One of Etsy's First Sellers!

Raised by hippie bikers in Pennsylvania, a quiet early life made way for an enhanced inner world. Instead of going to the mall like a “normal teenager”, Desira spent her youth watching cooking shows and perfecting dishes, running through the woods dressed as a witch, making home video productions, reupholstering furniture, painting, drawing, sewing, and making artwork.

It would all make sense that she would go on to start her own clothing company at 22 making painterly mid-century silhouettes and be one of Etsy’s first sellers in 2005. In 2007, CEO & Founder of Etsy.com, Rob Kalin invited Desira to become part of a small cooperative think tank of his favorite NYC designers and they shared a studio overlooking the ocean in Red Hook Brooklyn together for three years. It was then that Desira produced and sewed her small run ready to wear and custom garments and accessories in this space harnessing contracts with stores in California, Japan, Australia, England, and NYC.


Desira Pesta, Desira’s clothing company has become a favorite amongst indie lovers and Desira was one of the final 25 possible contestants for PROJECT RUNWAY seasons 7 & 8, missing being on the show by inches both times.

She has always been in front of the camera, whether it was modeling as a child, creating her own storylines for home video theatrical productions, auditioning for America’s Next Top Model, or in school theater & forensics. With a natural knack for all things creative, she has lived an alternative lifestyle, supporting herself solely through creative hands-on endeavors. She joined the Screen Actors Guild in 2009 and has been working in tv & film since.

Desira has been teaching sewing classes in the NYC area since 2009. She has worked as an instructor at 3rd Ward Brooklyn, The Sewing Studio, Brooklyn Craft Company, Kollabora.com , Etsy.com, and countless private lessons. She has also worked as a contract sewer for Bebe, The Row, Ohne Titel, & Randy Carfagno productions. Desira is currently obtaining a Masters degree in Costume Design from NYU's Tisch School of the Arts.